WINDOW is Brighton Fringe's Arts Industry showcase created to develop and encourage artists ready for the next step in their career. We spoke to Rendered Retina, whose show Form was selected as a WINDOW participant.

Hello! We are Rendered Retina, an Essex based theatre company who create physical, visual and often non-verbal work that explores the human condition. There are three of us: Myself (Tom), Alex and Jordan and we’ve known each other for 12 years.

Our show is called Form. It is a physical, non-verbal journey into the wonderful worlds our mind can create for us when we are bored. Audiences follow three office workers going about their routine until one of them tries to escape into his mind. The space transforms as stationery, cardboard boxes and 20,000 (yes 20,000) paper balls become a beach, a pirate ship, a snowy tundra and more. Form considers issues around work and living, it’s comedic and tragic as these workers attempt to find the balance between the constriction of order and the terror of chaos.

We’ve been interested in performing at Brighton for a while now as the chance for exposure at the largest arts festival in the country is too good to miss. Brighton Fringe also marks the start of our tour of Form, beginning here and at The Warren is just the perfect way to kick it all off.

I think the opportunity to have our show marketed to over 2000 arts industry professionals is just something we couldn’t not apply for. As it doesn’t cost anything we really had nothing to lose and everything to gain. Just to have our name alongside the other companies makes the whole thing worth it, though extra dates and opportunities to perform the show wouldn’t go amiss either!

How did you react to being told you’d been selected to be showcased?

We were absolutely over the moon! That week we had a couple of unsuccessful applications come back and although that kind of thing comes with the territory (of being an artist) it can get you down. But when we got the email it just gave us a renewed energy to crack on and make this show what we know it can be.

We’ve had a few more followers on Twitter, Instagram and Facebook and chances for interviews (this one included). Of course, we won’t truly see the benefits until after our run but so far it has opened up a couple more doors that were previously closed, so it’s all very exciting.

Tough question, there’s so many! I would have to say that it’s having the chance to workshop with young people and hopefully inspire them to pursue a career in the arts. Workshopping in our local area is how we started before creating our own work and it’s just so fulfilling to see young people engage in arts activities.

I don’t think you can ever be fully prepared for the amount on admin that goes into setting up and running a theatre company. A lot of things that we had to overcome were things we were not taught like registering as a company, setting up a business account and contacting venues. There’s a lot of learning on the job to be done, but our passion for making this work drives us through it.

A couple, yes! I’d say the weirdest one comes after we have completed a physical warm up and are waiting in the wings whilst the audience enter. The three of us huddle and recite the prayer from School of Rock that starts ‘God of rock, we thank you for this chance to kick ass…’. We love that film!

When it comes to coming up with a concept for a new show we take a very relaxed approach as we don’t want to force anything. Our work begins with two images that we know will bookend the piece (for Form we had the image of an office space and another of that same office covered in paper) and then our rehearsal process attempts to find a narrative between them. It’s a very playful way of working and that reflects itself in our work but once the structure and story is set we become extremely disciplined in making everything slick and precise.

What has been the single best piece of advice you’ve been given in your career?

We’ve been lucky to have had so many wonderful people around us who have given us nuggets of wisdom along the way. I would say the most helpful advice was to say yes to things first and then think about them afterwards. So many times you might miss out on a great opportunity because you thought too much about it. Even just in rehearsals to try a new idea, it may fail or it may be great, you’ll never know unless you try.

I think since the Harvey Weinstein revelations came to light our industry has been rocked by just how widespread sexual harassment and abuse of power in the workplace is. It is heart-breaking to hear all these stories and we can only hope that all the brave women and men who have come forward see real change.

Tom- I really can’t imagine having any other job outside of the arts, although when I was a child I really wanted to drive cranes. Does that count?

Jordan- As boring as it sounds, when I was a kid I really wanted to be a maths teacher despite my lack of real mathematical talent!

Tom- The decision you are about to make by doing a BTEC in performing arts will be the greatest decision you make. Do not panic.

Jordan- No matter how it appears, there is nobody in this world that really knows what they’re doing, so take it one day at a time and enjoy the ride.

Alex- The very tiny seed of an idea you’re having about making a theatre company, be excited about that.

What advice would you give to young people who want to enter the industry? What should they do and not do?

DO make the work that you want to make and that means something to you, only then will it really mean something to others.

DO be nice to people, everyone you meet could be very important in the future. Plus, it’s just easier to be nice.

DO NOT worry when the rejections hit. It happens to everyone and if you can pick yourself up after them, you will be better for it.

We have info on our show plus rehearsal clips and promo videos everywhere! 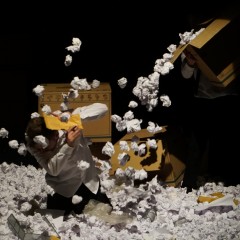 WINDOW is Brighton Fringe's Arts Industry showcase created to develop and encourage artists ready for the next step in their career. We spoke to Rendered Retina, whose show Form was selected as a WINDOW participant.