Is this your first Fringe?

This is my first Fringe attending and performing! 360 ALLSTARS performed at the Fringe last year, but this is my first time with them - I’m the rookie of the group.

Are you enjoying it?

I love it! I love the community vibe, there’s a really cool, calm atmosphere to everyone but there’s also a bit of a ‘turnt’ kind of atmosphere once the sun goes down! It’s a lovely vibe.

When did you join 360 ALLSTARS?

I think last week was my first run of shows…I’ve been rehearsing with them but my first time performing with them was last week at Adelaide Fringe. No better place to start!

How long have the group been performing?

Well this is 360 ALLSTARS’ sixth year; they’ve been all around the world, to Broadway, to the UK, through Europe and Asia, and as I said they’ve played Adelaide Fringe and it’s a pleasure to be back again.

What about you personally?

I myself have been rapping and performing for about seven years, and touring for about five years now. It’s a new project for me and I’m very excited to be part of the team.

Why did you want to be a performer?

In general, I love the platform where you can bring a positive vibe to people and just have a positive impact on anyone, however old, whatever their background. You can add to people’s experience of life. I know it sounds a little cheesy maybe, but it’s a really simple way to do things.

After Adelaide Fringe we’re going to be heading to the Commonwealth Games, playing some shows there, and then we’ll be touring around Australia before making a move to China. That kicks off in May, and then after China we’re heading to Europe and Edinburgh Fringe will be the next Fringe Festival.

I was hoping you’d say that! What advice would you give to young people who want to become performers?

The one bit of advice I can give everyone who’s aspiring to any of the performing styles we have, from breakdance to basketball to BMX: practice, practice, practice. And make sure you enjoy what you’re practicing, because if you’re not enjoying it, there’s not much point in getting really good at it. But if you do enjoy it you’ve got to triple down and practice all day, as much as you can. And if you do enjoy it then it doesn’t feel like practice.

Sette: I would say, get your ten thousand hours in-

Roman MC: Be yourself, and at the same time be confident and brave enough to try and improve yourself in a way that can make you uncomfortable, because you grow when you’re uncomfortable.

And finally, don’t you think it’s a little unfair that you can all do each other’s skills? Share the talent please!

Roman MC: Oh, they can cross over because they’re all monsters and absolute legends; I’ll be lucky if I can dribble a basketball by the end of this tour!

Thank you so much to Roman MC (and B-Boy Sette) for taking the time to do this interview! 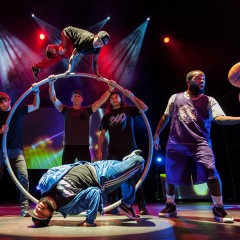 Interview with Roman MC from 360 ALLSTARS