Voice MagInterviewsInterview with Sam A…

My name is Sam Anderson, I’m 34 years old, from Melbourne, and I’m a solo performing artist.

What show have you brought to the Fringe?

It’s called Bi-cycle, and it’s a coming-of-age story, I guess: 45 minutes on a spin bike - it’s a bit of a mockumentary-style take on a conventional class. I’ve taken classes for over ten years and those classes are always about pushing through the resistance which you physically turn up on a bike, so I started to think about where the resistances are in my life, and it was sexuality. I never wanted to talk about it. I mean, I still get uncomfortable talking about it to people I think will judge me or not like me. So the show is about finding yourself, and in the end, knowing that it takes a lifetime to get to know yourself, and that’s okay.

Very important question: are the audience also on spin bikes?

No, they’re made to feel as though they’re taking a traditional spin class, but it’s all mime. So I come out and I adjust the bike and take everyone through the exercises, but then I go off on a tangent about my life, when I shouldn’t, really. I took yoga for years and after we’d done a ‘heart-opener’ the instructor would always say something like, ‘If feelings of your ex are coming up for you right now, just notice them, like passing clouds’. There’d be a silence and then you’d realise that they just want to talk about their ex! So I wondered, what if someone did, and went into detail, in this classroom setting?

Is it difficult for you to share such personal things onstage, or is it more liberating?

It is, yeah, now that you say that, it is liberating. It’s difficult on a level, especially when you know people in the audience, but it’s extremely liberating to be up there every night claiming your story. It’s exhilarating and it’s awesome. I did this to my parents in my garage three days ago, before I left, and my dad sat there and was just stone-faced, but he stayed. He got up once to turn on the barbecue, but he came back! They were, to me, the hardest audience, because it’s about them, and feeling like I’ve lost their love.

So were your parents not always accepting of your sexuality?

No. I mean, they sent me to a shrink the first time I mentioned it. I was 22; that was over ten years ago. They just said ‘we’ve found the best, you’re going’, and this therapist just sat there and said, ‘you’re a cat’. He told me that I want attention, but once I’ve got it I don’t want it anymore. And then he said, ‘I don’t think you’re clinically gay. You’re a cat’. And I was just so confused. I didn’t know what to think. And I feel like, had my parents just been accepting - which is maybe hard for a parent - I think I would’ve…well, maybe I never would’ve written the show!

Are they more accepting now?

Yes, definitely. But when I grew up they weren’t accepting of my femininity, they confiscated clothes that were a little ‘out there’, books on sexuality and so on. And when I came home from drama school, aged 22, I had pink nails and I was in the throes of experimenting, and my dad looked at me and asked, ‘Are you on the other side of the fence?’, and I wasn’t sure, and so they sent me to a therapist. Immediately it was clear that it wasn’t okay.

How did your parents’ actions affect you?

Well I think that effed me up a little. And I don’t want to blame them, but I remember thinking that I wanted to get out of the house, I didn’t want to be there. I was confused. I had a beautiful girlfriend in uni, with my pink nails, and I loved her, but I threw myself into experimenting because I’d had so many people, from very early, saying to me, ‘Oh, you’re gay, right?’. I’d never thought that I was, but everyone else thought I was, and it’s like I’ve had a big headache about this issue for over ten years. So, ten years after the dodgy cat therapist, I decided to go and see someone who I chose. And I saw this therapist, and we talked about it, and I walked out of there feeling lighter and freer.

So did you continue with counselling?

How did that help you?

Oh, it was just great to have someone to talk to every week. And they had no agenda. They were just listening, unlike my parents. My mum said to me once, ‘We’ll accept it, but we won’t like it’, and it’s that kind of negativity that makes you not want to talk about it with them. Years later they’d ask me if I’d ‘sorted it out yet’, and I didn’t want to tell them. But at the same time, you’ve got to be brave. I thought, for a while, maybe if my parents accepted me I’d be able to accept myself, but obviously it’s the other way around. It’s hard, feeling like you might be bisexual, because it’s not concrete; there’s a fluidity, and that’s been challenging.

What advice would you give to young people who are also trying to come to terms with their sexuality?

It’s tough, but you’ve really got to stop and listen to yourself. Listen to what you need, not what your parents need, or friends who think they know what you are - so many friends would tell me, ‘Sam, you’re gay. Come on’, and that was hard too because I just wondered if there was something I wasn’t seeing. So you’ve really got to listen in and find what’s good for you, and then assert yourself to your parents and say I’m A, B or C, or I’m going through this right now - it’s really about communication.

It can be tough to say that sometimes though, can’t it?

Oh, of course. I’ve been flyering all this week, and I’ve been saying, ‘Sexual confusion on a spin bike!’, and it’s even hard to do that when I see a mum and dad - if I see a guy with blue hair and a piercing I’ll be like ‘Come!’, but because of my experiences with people who do shut down, it’s hard.

Do you think the arts help with dealing with things like this?

Totally; there’s nothing like it. You can turn your pain into beauty - and I stole that, that’s from Carrie Fisher before she died - and that’s something every artist has a hold of. I didn’t want to talk about my sexuality, so that’s why I’m talking about it. The hardest thing to talk about is the thing that must be talked about. Speaking about this, I’ve met a lot of people who have said they’re going through the same thing, and that’s been amazing, understanding that there are so many people like you. The lovely girl who took my photographs in Sydney, at the end of our first session said, ‘I think I want to see girls more. I’ve been on the fence, so thanks for doing this’. That was amazing. And I’m by no means there, but I’m getting to know myself one show at a time.

Thanks so much to Sam for taking the time to do this interview! 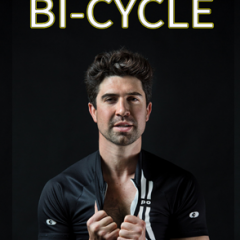