Joanne Ryan takes some time to talk to Voice about Eggsistentialism, inspirations, and to give advice to young people.

I'm Joanne Ryan; human female, Irish theatre maker and the writer and performer of Eggsistentialism which has its UK premiere as part of the Fringe.

Eggsistentialism is a multimedia, comical, autobiographical narrative charting my journey towards a decision about whether or not I should have kids. Ostensibly it's about me staring blankly down the barrel of my final fertile years and not having a bog what to do…but it's also about the social and political context in which we make big decisions like that and how one generation differs from the last and affects the next. It's a moving and irreverent comedy, a complete exploration of the complexities and contradictions involved in deciding whether or not to reproduce – and includes occasionally helpful but often bonkers input from fertility experts, daytime radio, fortune tellers, my mother and the darkest recesses of the internet.

I first went to Edinburgh as an audience member three years ago and was blown away by the madness and energy of it. 'Wouldn't it be just amazing to come back here with a show of my own some day', I thought to myself, 'What a thing to be a part of.' And here I am!

I'm very proud of the show and really excited to be bringing it to an international audience. It was a huge success in Ireland and really resonated with people there so I'm hoping that it will do the same at Fringe. Edinburgh is also where most of the world's programmers gather to find work so I'm hoping for future touring opportunities as well.

The sheer scale of everything: the number of venues, artists, presenters, audience members. Its steroids are on steroids!

I've only been to the Fringe once so I can't speak from experience but I'm sure it has changed. Everything does. In 1947 it started with eight theatre companies, last year there were over 3,000 shows so it has certainly grown.

I got into professional theatre quite late really. I lived in Bangkok, Thailand for most of my 20s working as a teacher and journalist and performed in theatre shows on the side. Then in 2009 I moved home to Ireland, on a romantic whim, to live in a very isolated part of the country studying Irish. That led to some Irish-language film and TV work until I found myself drawn back to theatre. A few years later I started transitioning my practice towards writing and creation and at the moment that's what drives me. In an odd way, the recession helped too. I moved home in 2009 when the country was bankrupt and magazines and newspapers didn't have a budget for freelancers – it was easier for me to make a living as a performer than by doing my 'real' job. Crises can be a source of great opportunity!

I think I might have ended up working in radio if I hadn't moved away from journalism and I had made steps in that direction before the TV work started. I've always had a soft spot for radio – I grew up without a TV but the radio was on constantly and I loved the talk shows, the radio drama, the zany comedy shows on a Saturday morning, the short stories late at night; it was all magical. It's something I'd still like to try.

The first poem I remember writing was for my 3rd class (Year 4) teacher Mrs O'Reilly when I was 8. It was called This Wonderful World and was about the planets and the universe. It had a bit of a spiritual vibe because I was a very pious Irish Catholic child. I loved that poem and was so happy that I had made it. Making art is a mystical process that still amazes me; first there is nothing, then there is something. It's magic!

I don't feel pressure because it's something that I want to do, particularly with this show. Eggsistentialism documents my experiences but the show acts as a social document as well. It is about the political in the personal and the challenges facing a generation and has started lots of important conversations in Ireland. I think art, even at its most whimsical, can be a powerful agent for change, and also, if you're going to spend two or three years of your life working your heart out on something it may as well have a function!

Eggsistentialism is about a demographic shift; about a generation who are increasingly moving away from the belief that having a child is inevitable or the be-all-and-end-all of a successful life. It's estimated that more than a fifth of young girls in Ireland and the UK today will never become mothers.

I should probably say someone brilliant and dead and theatre-y like Brecht. But I'm going to say Caitlin Moran. She's someone who I have a lot of respect for but who also strikes me as being fun and like-minded so we could work well together collaboratively as fun-loving equals. And I'm a huge fan, she's done a lot of good while also being very, very funny. The Sunday Independent called me "Ireland's answer to Caitlin Moran" last year and I don't think I stopped grinning for about a month.

Eggsistentialism is performing at Summerhall at 13:00 until the 27th August (not 22nd). For tickets and more information visit the Ed Fringe website. 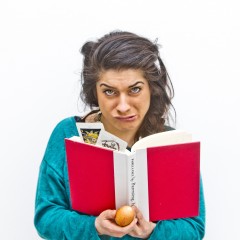 Joanne Ryan takes some time to talk to Voice about Eggsistentialism, inspirations, and to give advice to young people.