Aatif Nawaz takes some time to talk to Voice about the show, inspirations, and to give advice to young people.

Hello! My name is Aatif Nawaz. I'm a stand-up comedian. I live in London. I enjoy reading, walks on the beach, sudoku and cricket. If there's anything else you want to know about me, you can find out on my Mum's daily Instagram live videos.

How would you describe your show?
It's called The Last Laugh. Mostly cause it's on so late. So.... you know...it might literally provide the last laughs of the day. Also...it's about my 10-year anniversary in comedy. 10 years of navigating the merky, confusing, often frustrating but always hilarious UK Comedy Scene.

Why do you want to perform at Edinburgh Festival Fringe?
It's a space where I have complete freedom. To be brutally honest. And audiences can be brutally honest as well. So, 25 shows in 25 nights is a hugely enticing prospect. Plus...you know... it's harder to find deep fried mars bars at the Lahore Fringe Festival.

What differentiates it from other festivals?
The size. The sheer number of shows available. No-one's gonna watch your show to kill time. People have a mental amount of options. So, every time you fill your room, it feels like a secondary achievement. If you can kill it in Edinburgh, you can kill it anywhere.

Do you think the Fringe has changed over the years? If so, how? Are these changes positive or negative?
I think it's gotten more accessible. Which is brilliant. More people enjoying performing arts means more potential audience members for people like me. Which means I'll potentially make more money. And I'll potentially make my next mortgage payment.

What first motivated you to enter the industry? Who were your inspirations?
I wanted to be a star innit. For people to love me and have lots and lots of money so I can buy my friends and family lots of nice presents. Nice things are generally more expensive. Not always, but generally. So that was the motivation. Well in the beginning. Over time, I learned there isn't really anything else I know how to do that will earn me a living. At this point, it's more of a necessity really.

If you didn't have your current job, what would you probably be doing?
Scottish Tablet Taste Test Judge. That's a thing, right?

If you could have any job in the world, what would it be?
The head writer at WWE. Not a staff writer. The head. I don't take notes...

What is your earliest childhood art memory?
Getting in stage at the Pakistani Association of Britain's Summer Party and performing a sequence of impressions of Pakistani celebrities. You have no way of verifying this...but they were amazing. I was 7. Smashed it.

Do you ever feel any pressure to be a social commentator, or constantly update material to respond to events?
Not really. I'd rather talk about how I feel. People will get the news. They can see what's going on. I'd rather share something more personal. Even with my previous shows, which focused on elements of society I found troubling, it was always grounded in my experiences and opinions. Basically...it's all ME ME ME ME ME!

Equally, do you think there has been a shift in public sentiment that has affected your work?
Well I'm Muslim. So fewer people sit in the front row. Probably because a solid diet of Halal meat helps create more dense saliva. Why - what were you thinking?

Describe the last year in 5 words or less?
Eye Openingly Frustrating Yet Fun.

If you could work with anybody, from any point in history, who would you pick and why?
Stone Cold Steve Austin. One of my heroes. I'd make him play my Dad in a sit-com. I'd come up with some wacky explanation to explain how Stone Cold Steve Austin could have a Pakistani son. Whatever. We'll work it out. Let's make it happen.

Why would a performer opt to do either a ticketed event or participate in the free fringe? What are the benefits and limitations of both?
You're more likely to have posh press turn up to your show if it's ticketed. You have to work a little harder to get their attention with a free show. But perceptions have changed. I love the laissez faire vibe of the free festival. You really have to work for your money. If you don't deliver the HaHa's, they'll walk right past your bucket without as much as a glance.

What advice would you give to someone who wants to take a show up to the fringe?
Make sure you love your show. Like be IN love with it. You're gonna do it every night for 25 nights, 60 minutes a night, sometimes in front of a very small number of people. In the toughest of environments, you need to find a way to enjoy yourself. So, it all comes back to living your show.

When and where can people see your show?
I'm on at 11:15pm at The Newsroom (Laughing Horse). Show's called The Last Laugh. Come.

Aatif Nawaz: The Last Laugh is performing at The Newsroom at 23:15 until the 27th August. For tickets and more information visit the Ed Fringe website. 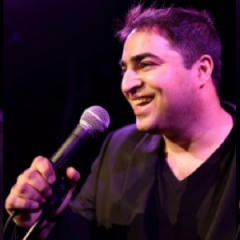 Aatif Nawaz takes some time to talk to Voice about the show, inspirations, and to give advice to young people.