Markus Birdman takes some time to talk to Voice about the show, inspirations, and to give advice to young people.

My name is Markus Birdman. I am a comedian & artist. There, I said it. Acceptance and admission are the first steps to recovery.

A heady mix of erudite bragging, mellifluous storytelling, autobiographical stand up, justifiable moaning, male feminism and glorious artwork. I have taken the fairytale of Rumpelstiltskin, rewritten it with a post-Trump agenda, and animated it with my own drawings and the silly voices of better-known comics than me.

It's a vehicle to discuss all our hopes and dreams. It might be too early to say this, but I believe it could save the world.

It's great fun to produce a show. I enjoy the artistic and creative endeavour.

None of the other festivals are in Edinburgh. And it's easier to get heroin.

Yes, when I first came in 2000 I felt audiences were coming with no agenda except to see great shows. They would put their ear to the ground to find out who were doing the best shows. And it would be Ross Noble, Sean Lock, Bill Bailey and so on. So those were the shows that would do best. A show would succeed according to their merits.

Now, that so many comics have achieved a varied degree of fame and celebrity, I feel more people are coming to see that person 'off the telly.' That's eclipsed what is actually going on, and who is doing the best work.

Add to that the soaring costs and it puts comics without a TV portfolio in an impossible position. That said I think the Free Fringe is changing that situation somewhat.

I became aware of stand up with Eddie Murphy in the 80s. Some of the material has not aged well, but it's a masterclass in performance and the dude is wearing a red leather suit. So hats off to him.

Through him, I became aware of his clear influence: Richard Pryor. He wasn't averse to wearing some niche clobber either.

Likewise, Eddie Izzard, who, in the early years, was a nonsense alchemist. I later loved Bill Hicks, who was socially and politically spot on, but much less dapper.

More contemporarily, I adore Dylan Moran, Tommy Tiernan and Rhod Gilbert (who voices one of my animations). I think what they all share is an ability to be hilariously self-righteous. Mercifully, they don't all share the same tailor.

My father was a Naval Chaplain and would do services at the Naval College in Greenwich. The Chapel's walls and ceilings are bursting with really beautiful C18th neo-classical murals. It was quite over-whelming. I think I both loved the clipped English formality of the situation and detested it too. That and getting a detention for making a plasticine penis in Art when I was about 8.

Well, I'm not a political comedian, so I don't particularly. That said, I try to deal in matters of the heart, and that is always current, and naturally some of the bigger issues of the day seep in.

For instance, Trump makes an appearance in my show. I didn't invite him at all, but he seems to have grown in relevance during the writing process. I suspect this is because I am really at one with the cosmos.

Not as much that the public want to see different work, as who they want to see do it. As I suggest above, there is a growing interest in seeing 'that person off the telly,' and more recently, 'that person of YouTube'. I'm not knocking what they do, indeed some of it is superb, but in the correct context, and it's a totally different type of performance.

Yet, there seems more of an appetite for them when they perform live, than for people who've made performing live their business for decades.

It's Two Thousand and Seventeen.

I'd loved to have done an art/comedy performance with Keith Haring. He was a street artist from New York in the 80s. He began in the subway, drawing in chalk on old advert posters and ended up in the most prestigious galleries, fashion houses and even on the Berlin Wall.

I loved his imagery, which was very simplistic and often with a direct socio-political message, and yet very decorative and playful. But how he applied his work was more interesting. He looked beyond the confines of a gallery and encompassed, music, fashion, graffiti, music videos, merchandise. He even had his own shop.

Him or Ronnie Barker.

I have no idea why anyone would do a ticketed event these days. More people come to your show, they are more enthusiastic, and you actually get paid.

The Free Fringe now has as good rooms, and the old guard is not extorting you. It's just greed, and protectionism that keeps that system going.

Come up the year before and have a sniff around. See how it works, or how it doesn't. Look at the various rooms and what suits your needs and make some friends. You're gonna need 'em.

Markus Birdman's Between the Devil & the Deep Blue Sea is performing at the Laughing Horse Bar 50 at 15:30 on 3rd – 27th (not 14th). For tickets and more information visit the Ed Fringe website. 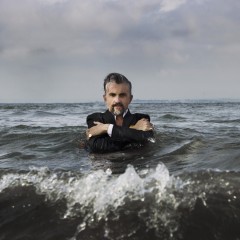 Markus Birdman takes some time to talk to Voice about the show, inspirations, and to give advice to young people.