Voice MagInterviewsInterview with Rob A…

Rob Auton takes some time to talk to Voice about the show, inspirations, and to give advice to young people.

Hello reader. My name is Rob Auton, I am sitting in a flat in Leyton in London. It is Sunday evening here. I am going to be the writer of the answers to the questions below. I haven't read the questions yet. Here we go then.

My show this year is a show about hair. It is called 'The Hair Show'. To commit to the subject, I have not had a shave or been to the hairdressers since last August. Every year for the past five years I have written a show on a particular subject. I start by writing the subject in the middle of a spider diagram and I then write an hour of material about that subject. I start writing it and performing bits and then I develop it into an hour-long show. It gives me a chance to go off on one through writing and performing and that is my favourite thing to do. So far I have written and performed 'The Yellow Show', 'The Sky Show', 'The Face Show', 'The Water Show', 'The Sleep Show'.

It is the most brutal obstacle course for the mind and the body I have been through and it makes you question everything about yourself as a human and a performer. No two days are alike up there and it really tests your stability. Doing a show day in day out in front of a different audience helps you find yourself out very quickly.

It is in Scotland

I have only been going up there since 2009 which isn't very long in the grand scheme of things so I haven't seen that much of a change. I have seen more shows become cheaper or free and I think that is a positive thing.

I was motivated by a need to share my ideas to see if I was the only one who got anything from them. The thoughts that were coming to me and making me laugh and think were things that I wanted to share to see if other people liked them. Sometimes I am the only person who likes them but other times people in audiences like them too. I was inspired by pretty much anyone who got up on stage because I thought "Wow look at them standing up and testing themselves. I wanted to test myself too and still do. The people who inspired me to want to write and attempt to share my ideas were Bob Dylan, Neil Young, Tom Waits, Ivor Cutler, Stanley Donwood and Francis Bacon.

I would probably be looking for a job as a firework designer.

I remember sitting next to a black and orange stool at my granny and grandpa's house. It was only about 30cm high and my head was level with the seat bit so that has to be a pretty early memory I guess.

No, I think other people have got that covered and it's good that people do it.

I would like to go to work with my dad's old plumbing partner on the day when he was working in a notoriously haunted building in York and a ghost walked through him. Why? Because he's got his head screwed on and doesn't seem like the type of person who would make something like that up.

I have only done the free fringe as a solo performer before. I am doing the £5 book in advance or pay what you want after the show this year. I think the free fringe is good because people who might be in two minds about seeing you will probably take a punt on your show if it's free.

If you want to do it, but you don't know if you should, do it and if it goes badly then it will be really helpful and if it goes well it will be helpful but not as helpful as if it goes badly. Try not to get sucked into the dark side of reviews and stars. Buy and eat as much fruit as you can. Remember that if you smile the world smiles with you unless you are giving out flyers at the Edinburgh Fringe.

3.55pm at Just the Tonic at the Caves. 3rd -26th not 14th. I'm going to tour The Hair Show around the country after the festival too.

Rob Auton: The Hair Show is performing at Just the Tonic at The Caves at 15:55 on 3rd – 26th August (not 14th). For tickets and more information visit the Ed Fringe website. 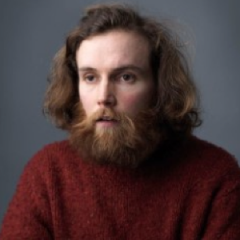 Rob Auton takes some time to talk to Voice about the show, inspirations, and to give advice to young people.