Harry and Chris takes some time to talk to Voice about the show, inspirations, and to give advice to young people.

Hi reader, nice to meet you. I'm Chris, from Harry and Chris. Harry is next to me, reading over my shoulder. He says hi too.

Because it's incredible - it feels like the center of the world for a month, and there are so many wonderful people and shows everywhere you look.

Aside from being huge, there are so many different shows and such a variety of things to see, all within the familiarity of a city.

We first went to the fringe as punters when we were 18, and have gone up most years since. We're still pretty fresh to the whole thing but I guess there'll always be positive and negative sides to change. A key change for the better that we've noticed is that in the last two years there have been shows with us in them.

When we started out we were gigging in teenage bands together, and playing around London and slightly further afield. It's hard to tell when doing it for fun switched over into 'being in the industry', but it's always been fueled by having fun. Our main inspirations are Flight of the Conchords, sitcoms as we were growing up like IT crowd and green wing, and the bromance between Turk and JD in Scrubs.

Being in Harry and Chris

Not really - we keep our eyes open but always try and write from a place of joy, so if anything that's happening politically or whatever can play into that then happy days - otherwise I guess we don't want to give it any airtime. We've got a song about Robot Wars in the new show which is pretty controversial, if you're Sir Killalot.

Again, not really. We had a song in last year's fringe show - obviously during a pretty intense year - called 'Simple Times', which was all about finding joy in hard times and breaking down the overarching narrative of fear and hatred, but that narrative seems to have been going on for quite a few years now and will probably continue, so we'll keep playing the song.

Last year we were on the free fringe, this year we're ticketed so we'll let you know next year. The main reason we switched over was because there was no guarantee of an under 18 venue on the free fringe and our show is very family friendly, so we had to turn a load of families away last year.

Do it! But don't call it the Harry and Chris show. Unless it's a tribute show and you send people to our show at the end of it. In which case, do it!

You can find all our social media and other things through www.harryandchris.com

The Harry and Chris Show 2 is performing at The Mash House at 14:20 on 3rd – 26th (not 14th). For tickets and more information visit the Ed Fringe website. 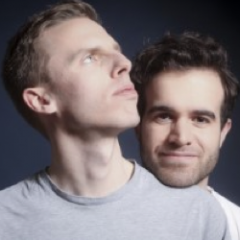 Interview with Harry and Chris

Harry and Chris takes some time to talk to Voice about the show, inspirations, and to give advice to young people.