Micky P Kerr takes some time to talk to Voice about the show, inspirations, and to give advice to young people.

How would you describe your show? My show is a journey through the time, shedding light on a beautiful way of life; laziness. There's live music, stories, facts, opinions and even a little spoken word poetry. Come and be a part of it.

I've been thinking about doing a show for the last couple of years but I wanted to make sure I did it right so I've held off....until now. In my opinion doing an Edinburgh show is almost a right of passage for any aspiring comedian. I'm doing it for many reasons but mainly to improve as a performer and show the industry what I can do. It's the biggest arts festival in the world and it's the highlight of the comedy calendar.

What differentiates it from other festivals? Do you think the Fringe has changed over the years?

I've been up to Edinburgh for the last three years and I've always wished I could have stayed for longer. What a place to be in August. As it's my first full month show, I've got a limited experience of the fringe but from what I've heard it's become more corporate over the years. Same as most things I suppose. All I'm doing is taking it as it comes because I haven't been around long enough to do anything else.

I've been a musician for years but I always had a comedic edge to my performances. My personality always outshone my music, (that's mainly because my music was terrible) so going into comedy felt like an obvious step. It's something I should have done a long time before I did. I've always loved musical comedy and always done it ever since I first started playing guitar. There are loads of greats but Flights of the Concords are the greatest of that realm.

If I wasn't a comedian then I'd probably be a primary teacher as that's what I'm trained to do. Not a proper one though, just one that hangs around drinking cups of tea and forgets about stuff he was 'supposed to do'.

If I could have any job then I'd probably be a Stone Age hunter gatherer.

What's my earliest childhood art memory? That's a great question. I once drew this elephant when I was ten. Honestly, it was absolutely amazing. Everything just came together. It must have been a fluke? My gran framed it and put it up on her wall. Every time I went round I saw it and thought, 'wow, that's one hell of an elephant, I'll never be able to do that again'. And I haven't.

I don't feel any pressure to be up to be a social commentator because that's essentially what you are anyway. No point in felling pressure. It's just you and the world. You're looking into your own life and your looking into everyone else's. That's what comedy is about.

I've had some material that relates to sensitive issues that I've took out altogether. I used to not worry about offending people but now I actually do. I use swear words but as I've progressed in comedy I've toned down the offensive material because I want everybody to enjoy the show. You've got to be aware of public shifts in conscience because it does affect what people will laugh at. A lot of people still get upset by words. I'm quite a daft person so that's what my comedy is like. Just daft.

If I could work with anybody in history I'd work with John Lennon for all the obvious reasons. I'm actually wearing a t shirt with his name and face on it right now.

I've opted to spend money on my venue etc to maximise the chances of my debut show making a big splash. I've also gone for a pay as you feel entry fee (or £5 to book) in order to try and sell out my shows but also to earn my money from the audience. The free fringe can work out amazingly for a performer but you don't have the luxury of picking your own venue and from what I've heard - not all of them are great.

What advice would you give someone about taking a show up to Edinburgh?

You'll have to ask me that in September, give me a chance.

You can see my show at:

Micky P Kerr is Lay-Z is performing at Just the Tonic at The Caves at 20:00 on 3rd - 26th (not 14th). For tickets and more information visit the Ed Fringe website. 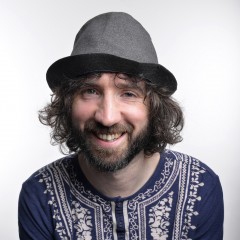 Micky P Kerr takes some time to talk to Voice about the show, inspirations, and to give advice to young people.