Mike Bubbins takes some time to talk to Voice about the show, inspirations, and to give advice to young people.

I want to perform at Edinburgh Fringe Festival because it remains the planet's premier comedy festival. I've written a really good show, and I want as many people as possible to see it. Plus, I got bored of sleeping in my nice house and not being overdrawn.

I suppose what differentiates it from other festivals is the recognisability and the duration. There are lots of great comedy festivals, but Edinburgh is still the one that is seen as the yardstick by punters and the industry.

I've only done the Festival once before, so I can't really comment. I'd only been doing stand up for a year, the first time, and I was still teaching full time. I didn't really know my backside from a hole in the ground, comedy wise. But it was an invaluable experience, which lead directly to me becoming a full-time comic. I imagine it's even bigger now. Actually, I know it is. I Googled it.

I had done a load of jobs before comedy: desk jobs, gym jobs, driving jobs, singing, rugby playing, and teaching. But I'd always loved comedy, and I'd ever stayed in a job that I didn't enjoy, life's too short, and all that. So after ten years teaching PE I'd had enough of doing that, and decided to give comedy a go. I think The Office was the actual inspiration for trying comedy, and not just changing jobs again. The part where Tim gives Dawn the oil paints and has written Never Give Up on her sketch of him was so beautiful. Sounds a bit cheesy, but it's true.

I'd probably still be teaching Or maybe coaching rugby. Or being the world's best Elvis Tribute Artist.

I genuinely love doing comedy; stand up, acting, writing, the whole thing. If had to do something else I would probably be a carpenter, or an artist, or a restorer of classic 1970s cars.

I've always loved art and drawing and painting. My earliest vivid memory was my first attempt at what I decided was proper art. I was 11 and we had to draw something in our house. My mates drew chairs, and TVs and tables. I sat in my parents bath (clothed) and did a self portrait of my weird hall of mirrors reflection in the taps. Very arty. My art teacher, Mr Gibbs gave me the only 'A' he ever gave me, and showed the whole class. I was chuffed with that.

I don't feel pressure to update material to current events, my show is about being quite the opposite, of being somebody who refuses to change to suit the changing times. But if there's humour in an event, or an event can bring out humour in something else I've written, or act as a strong counterpoint to it, I'll reference it.

I don't think that in the time I've been doing comedy there have been any seismic shifts. I didn't start doing comedy until after all the racist, sexist nonsense was seen as unacceptable and as bad comedy that relied on cheap laughs and punching down. So I'm thankful for that.

Self employed. Parent. No sleep.

There are pros and cons to both. I don't even think it's just a financial decision these days. There are excellent shows on the Free Fringe. There are excellent ticketed shows. If its a good act, in a decent venue, with an audience who are up for it, its going to be a good show. Whether, as a punter, you've bought a ticket, or dropped some old Pesetas in a bucket, is irrelevant.

Take a show up to the Fringe.

My Show, 'Mike Bubbins: Retrosexual Male' is on from August 2nd to 27th at The Assembly Rooms, George Square Studios, (Venue 17) at 6.30pm

My website, which has links to everything, is mikebubbins.com 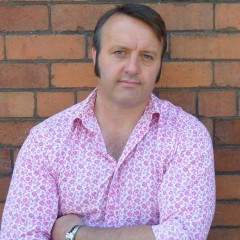 Mike Bubbins takes some time to talk to Voice about the show, inspirations, and to give advice to young people.