Hardeep Singh Kohli takes some time to talk to Voice about the show, inspirations, and to give advice to young people.

Alternative, Fact is about the political state of the world. I'm a deeply political animal and it feels like we need to reflect and laugh about the madness around us….

I think it's hugely important for Scottish acts to be part of the world's largest arts festival that is held in our country. It's also just a great time. I get to see a lot of shows and catch up with lots of friends. Plus they have great beer in Edinburgh….

In the words of Robert Burns, "Everything changes but you." Or was that take That? The Fringe has grown. It feels less like the edgy event it was and much more like a business. The free fringe has shaken things up but it does often feel like it's a showcase festival for performers that want a career in TV and radio.

Who doesn't want to work in showbiz?

Like so many Glaswegians of my age we simply wouldn't be where we are were it not for Connolly.

I'd probably be an advocate (what the English refer to as a barrister. Either that or an international style guru*

That's a very good question. In a sense it doesn't feel like pressure if you are genuinely engaged in the subject matter. Alternative, Fact is slightly different though. I need to be very careful not to end up lecturing or preaching….

Careful what you wish for

Yet another very incisive question! The free fringe mitigates against the huge expense of simple getting a show on at the fringe. Some folk budget to lose a few grand just to come to the fringe.I might have gone to the free fringe but given I already have a profile I might have taken an audience that an up and coming act deserved. 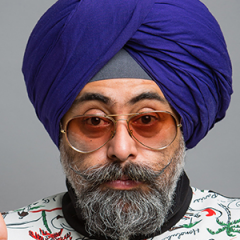 Hardeep Singh Kohli takes some time to talk to Voice about the show, inspirations, and to give advice to young people.