Glenn Moore takes some time to talk to Voice about the show, inspirations, and to give advice to young people.

My name is Glenn, I'm a comedian, and my favourite food is cake mixture.

I tried to solve a missing person mystery when I was 15, and living with my grandad. I never managed to do it, so 12 years later I moved back in with him and tried to solve it again. I really hope nobody else is doing a comedy show specifically about this as well.

Everything you could need for a comedy show, as a performer or as an audience member, is there at the Fringe. All the shows are there, the venues, the audience, the nerves, the crippling debt. All there.

Having been booked for the Ditchling Festival, where my stage time competed directly with Samantha Mumba, and a child threw Skittles at me, the Edinburgh Fringe is a vastly different experience.

Enormously so. A kebab shop that I frequented a drastically unhealthy amount of times is no longer there, but at the same time I've since become a regular customer at Mosque Kitchen. So yes, the landscape has changed significantly.

I was forced to do my first gig, which is absolutely the worst way to start. Some friends of mine were running an open-mic night. A lot of the acts eventually dropped out, so the organisers asked if I could go backstage for an hour, write some material and then do a set. I did, and it was HORRIBLE. Like, absolutely awful. So, then I did it again and again after that until it became a job.

Getting in touch with distant relatives and seeing if they could help their long-lost great half-nephew twice-removed out financially.

Millionaire. Just, what a great job.

Smearing lipstick - and I mean, like, a whole stick - across my face at the age of about two or three, for no reason. In many ways it was similar to a piece of performance art I sat through at the last Fringe.

If I'm writing for a TV show or another comedian, I'll make sure the material I write is fully up to date, and as topical as possible. For my own material, I couldn't be less of a social commentator, unless society needs to hear more about disco-balls.

I think the more uncertain everyone has been feeling with regards to current events, the less serious my material has become. I personally watch comedy entirely for escapism, so I'm absolutely determined for my show to be for that purpose as well.

I'd work with the creator of Pizza Hut, and say 'hey maybe don't invent this - you will ruin Glenn's life and diet for years'.

This feels like a rare subject that I feel even remotely qualified to have an opinion on, as my show is both ticketed and free. The benefit of having a ticketed show is ensuring no sneaky rapscallions watch your show, then hotfoot it out before you've come offstage, leaving with their pockets brimming with assorted coins and treasures, and you empty-handed. If you're doing a Free Fringe show, you can make more money than a ticketed show from the bucket at the end. The downside is you have to do an awfully passive aggressive speech at the end where you ask for money.

There's a cheap way to do everything, but don't do it the very cheapest way. Do everything the second cheapest way. Also, there are plenty of compilation showcases at the Fringe, which are worth taking part in - if the audience likes the 10 minutes of your stuff that they see, it can be more effective than a flyer.

People can - and hopefully will - see my show from August 3rd - 27th (except 14th) at 6.20pm at The Tron. Its called 'The Very Best of Belinda Carlisle' I shall see you there. For tickets go to www.edfringe.com

I'm on Twitter, @TheNewsAtGlenn. I post jokes every day for free, a bit like my show that you should see. I'm also on Myspace and don't know my password, so that's a horrible, permanent snapshot into what I was like when I was 18.

Glenn Moore: The Very Best of Belinda Carlisle is performing at Just the Tonic at The Tron at 18:20 on 3rd - 27th August (not 14th). For tickets and more information visit the Ed Fringe website. 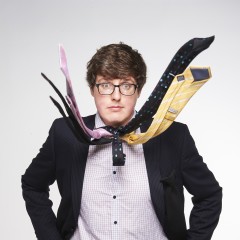 Glenn Moore takes some time to talk to Voice about the show, inspirations, and to give advice to young people.