Eshaan Akbar takes some time to talk to Voice about the show, inspirations, and to give advice to young people.

I am Eshaan Akbar, a stand-up comedian taking his debut one-hour show "Not For Prophet" to the Edinburgh Fringe Festival in 2017.

It's an hour of funny and thoughtful stand-up about working out exactly who I am given that I have a Labourite dad and Thatcherite mum, was a poor kid in a private school and made the journey from devout Muslim to not.

It's a showcase of some of the best comedy talent in the world and, in its 70th year, a great opportunity for me to add to the cultural fabric of the UK.

It appeals to an impressively wide array of artists and performers across a range of genres - and it's less muddy and more hygienic than most.

This is only my second full year at the fringe so I'll find out - I expect the walks will be just as uphill as it was last year though.

Other than a desperate desire to be loved and bring joy to hundreds and thousands? I admire the power of comedy to observe the most ridiculous facets of our society - from inane human behaviour to the crazy political landscape we find ourselves in.

Waiting for a promotion that would never have come in my job at the bank. Or writing the restructure that restructured me out of my own position - again.

Ambassador to one of the British Overseas Territories - that is as cushy as it comes isn't it? Or host of The Daily Show. Or the new Parkinson.

Attempting to draw a sunflower in school - in Bangladesh, where I spent one term - and failing miserably much to the chagrin of my mother

I don't feel any pressure to be a social commentator - I want to be funny first. But the things I find funny tend to be politics, society and finance. Essentially, I find shortcomings and stupidity of some of the (supposedly) brightest people in our society endlessly entertaining.

In the short time I've been doing comedy (three years), this is definitely true. Audiences (and some comedians!) seem to forget that jokes and opinions aren't synonymous. I've had complaints about offensiveness from across the political, religious and socio-economic spectrum - and they have to be reminded that these are jokes and contrarian by design. And given that a lot of my material centres on my religious journey, you can well imagine, Islam is very much "in vogue" and "dangerous".

What on earth is happening?

I'd love to work with Richard Pryor - a truly transformative comedian at a time of heightened societal tension. He united all races when it was as fraught as ever. I'd love to work with Aramando Ianucci as well - a hugely impressive writer with incisive precision and wit in his view of the political machinations in the UK and US.

Ticketed - this is mainly psychological. A lot of audiences see a well-regarded venue and, as passing trade, will be more inclined to buy a ticket. I recently got interrupted by an audience member who, upon hearing I was at the Gilded Balloon said, "Oh...that's legit!"

Free fringe - this has more of "fringe event" vibe. There's an underground quality and although you don't know what you'll get at the paid venues, it seems more like a lottery at the free fringe!

Don't. Your show is taking up audience for my show. As long as yours if after 4pm, I'm cool with it. If you have guest spots, take me and allow me to flyer for my show. And if you're doing that, get on top of your admin early on - where you're staying, how much flyerers will cost you etc. Budget then work, work, work on your show! A good show supported by word of mouth is priceless!

Eshaan Akbar: Not for Prophet is performing at the Gilded Balloon at 14:45 on 2nd – 27th August. For tickets and more information visit the Ed Fringe website. 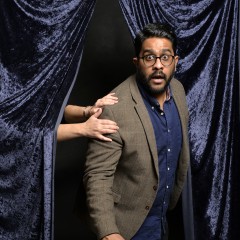 Eshaan Akbar takes some time to talk to Voice about the show, inspirations, and to give advice to young people.