Francesco De Carlo takes some time to talk to Voice about the show, inspirations, and to give advice to young people.

My name is Francesco, I come from Rome, Italy and I moved to the UK in order to prove to everybody that Brexit was a bad idea. Even if it weakened the pound, which is very good for me.

It's about a guy who has become disillusioned by politics, and just wanted to disengage and enjoy his comfort zone. However, the recent events forced him to change his plans and leave his sofa.

Because it's a very good opportunity to meet new people and grow up as a man and as a comedian. I hope I'm right about this, because the other option would have been to spend August in Italy, on the seaside, eating spaghetti with clams and drinking cold white wine.

It's much more colourful. It's like the kind of dreams that you have when you are really exhausted and you go into a surreal world, full of crazy people and weird ideas. The only difference is that in the case of the Fringe, you feel exhausted after the dream. But it is totally worth it.

I believe that the pressure is getting higher and higher, but there is also a growing awareness about this amongst the acts, so you can share this pressure with your colleagues and feel a bit better.

I am not particularly original when it comes to this question, because I really love the classics, especially British comedy. Strangely enough I was really into sketch comedy and not stand-up: I love The Goon Show, Monty Python's Flying Circus and most of all Charlie Chaplin. I always liked the power of comedy in helping people to not take life too seriously and laugh about difficult things.

I would have to have a job that requires a lot of passion. So, I can see myself having a sporting career. But I like comedy because with sport you cannot play forever. Age is a factor, but in comedy it helps you get better.

Astronaut. I have answered this question in the same way for a very long time...

During a theatre play at school, I was like 8 or 9, something happened and we had to stop the show. So, one of the teachers asked if someone wanted to do something to entertain the audience and I remember that I sang a song of a popular Italian pop star. I remember all the people cheering for me. It was magic, but probably it never happened for real.

I wouldn't say it's a pressure. Stand-up is about talking about the things that really matter for you. You can't lie about it. So, when you feel that you want to express your point of view about what's happening in our society, you can't wait to do it. Updating material is very hard during these times. Even TV dramas like Black Mirror or House Of Cards or Veep are struggling in being more fictional than reality, which changes so quickly, in the most unpredictable directions. That's why I prefer to talk about the general human condition that stands beyond the daily news.

When I started to write the show, the outcome of the recent elections or referenda all over the world had shown a situation I didn't like at all. It seemed that people were being influenced by the most irrational feelings. Now, it seems that people are taking back a little bit of their capability to have a more independent and critical thought. And I'm not surprised by the fact that the UK, after the last election, could lead this new wave of re-engagement, especially amongst the younger generations.

This land is your land.

I would love to be one of Federico Fellini's "Vitelloni". I hope you know that movie and all of the films from the Italian golden age of comedy, from the 50s onwards. Directors like Mario Monicelli or Dino Risi, writers like Age and Scarpelli, actors like Vittorio Gassman, Marcello Mastroianni, Ugo Tognazzi, Alberto Sordi. It's a shame that they are not so well known outside of Italy. 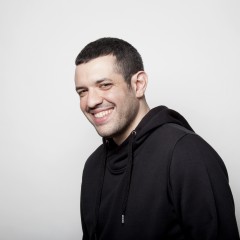 Francesco De Carlo takes some time to talk to Voice about the show, inspirations, and to give advice to young people.