Phil Nichol takes some time to talk to Voice about the show, inspirations, and to give advice to young people.

My name is Phil Nichol, the Perrier Award-winning, 26-year veteran of the fringe. I was one of the founding members of Canadian cult comedy heroes Corky and the Juice Pigs.

I am a comedian. I love my job.

'Your Wrong' happened because I was becoming fed up with the way we, as human beings, were/are interacting with each other. Whether it's correcting punctuation on someone's odd post about a 'flat earth' or listening to the stream of weirdness that is being tweeted daily from the White House or even our inability to pin down what is actual 'truth' any more. It feels like we are having a massive group psychosis. Our inability to listen and forgive will be the downfall of mankind. This show dissects the ludicrous nature of arguing through neat story-telling and hopefully hilarious personal anecdotes.

The greatest explosion of the arts happens in Edinburgh every August and I'm always delighted to be a part of it so that I can get out see as much different stuff as possible!

The sheer size and scope of it makes it a unique opportunity to taste a little bit of everything from the school reviews to the highest quality dance and theatre. It really does give you the perfect chance to explore the state of the arts!

I was influenced heavily by my mother who was a fount of laughter and fun. She was always making jokes and made life ridiculous fun. I learned a lot about writing stand-up and story-telling from Phil Kay, Dave Gorman and Owen O'Neill. Dave taught me that when writing true stories it was best to leave the 'jokey jokes' out in favour of honest laughs because once the audience leaves the real world for the world of 'jokes' then you lose them as far as what they will believe of the story. Owen showed me that theatricality can meld with stand-up and that pathos is an effective device to wring tears of laughter out of the audience. The Scottish comedian Phil Kay showed me that wild abandon at it's best is the funniest source of entertainment as it allows the audience to be in touch with their deepest joy and childish sense of play.

I'd be dead. Or snorkelling. Or both.

The one that I am doing. Being able to travel the earth performing over 450 shows live on stage a year, making people laugh and sharing ideas is an honour/privilege that I remind myself daily make me one very lucky human being.

I decide to become an actor whilst on a school trip to Stratford Upon Avon in Ontario Canada when I was 12years of age to watch The Tempest. The audience of children were talking throughout until Nicholas Pennell descended from the gods dressed as Ariel, huge wings floating down with a booming voice captivating the crowd. The whole theatre were stunned into silence. I thought to myself- I want to do that. I want that kind of power. Haha.

My show Your Wrong is about having fact-light and uneducated opinions based on your 'feelings' and superstition so it would be highly hypocritical to have anything more than a humorous take on current affairs. Did I dodge the question sufficiently?

Most definitely. Everyone is now an expert and we don't believe experts any more. Now, that we have realised that the earth is flat, that 9/11 is an inside job and that the moon is hollow we have, as a species, mush greater chance of meeting our maker, Elon Musk- The New Emperor of the Planet Known as Earth (Flat)

I'm really enjoying the idea of working with Bob Slayer's Heroes of Fringe this year as I see the 'Pay What You Want' model being the most artist/audience friendly. It's not the 'free fringe'. You can reserve a cheap ticket before the show to ensure that you get in the shows that you want or you can wait for any empty seats on the day and pay what you want (can afford) This also the punters to take chances on things that they don't know without investing a packet but also allows for fans to make sure they see their favourites. I love this model and wish that it could be adopted Fringe wide.

Do it. Take a chance. Research the cheapest methods. Contact me and I'll help or put you onto someone who can.

I have two shows-

My solo hour of stand-up is entitled Phil Nichol: Your Wrong is at 9pm (3rd-27th) at Monkey Barrel (Headroom)

Phil Nichol: The Asylum is performing at Heroes @ Monkey Barrel at 23.50 every 3rd – 26th every Thursday, Friday and Saturday. 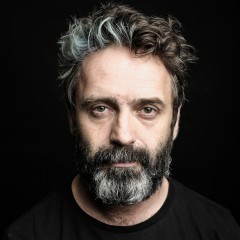 Phil Nichol takes some time to talk to Voice about the show, inspirations, and to give advice to young people.