Elf Lyons takes some time to talk to Voice about the show, inspirations, and to give advice to young people.

Helllooo there. My name is Elf, or Elfy amongst friends. I am 6ft tall. I'm a comedian. I'm queer. I do drag, run an LGBT comedy night and make clown theatre with my theatre group RaRaRa. I hate soup. I just finished training at L'ecole Gaulier in France and I live in Brixton. My favourite things in the world are books, baguettes, playing basketball, trying to Vogue and pretending to be a horse.

When Mary Poppins jumps through the painting and lands in the world with all the dancing penguins. Exactly like that.

It's comedy mecca. I'm addicted, the idea of spending my August anywhere else other than Scotland feels completely perverse now. I get to spend a month completely nocturnal, amongst all my friends, seeing as much theatre and comedy as I can.

It's the biggest, busiest, boisterous and buxom of all festivals. There is something for everyone and it feels unending. It's the Infinite Jest of festivals.

Every year it evolves - obviously technology has changed how the festival operates and how audiences discover shows and how performers reach out to potential audiences, so that is great and has benefited so many people. Every year it becomes more global, with new styles of performance constantly appearing and more opportunities for performers to come to the festival - in the forms of new funding initiatives, new venues and new festival models such as the Free Fringe, the PWYW model and paid fringe to choose from.

At the same time, the numbers of performers do feel to trump the number of audience members, and that can be nightmarish. And Edinburgh festival accommodation costs are horrifically expensive.

I couldn't imagine anything else. All I wanted to do was make people laugh and when I manage to do it I feel so happy. I was lucky to discover the career that made me happy. When I was 15 I was inspired by comic performers like Tamsin Greig, Olivia Colman, Michelle Gomez, French & Saunders, Patricia Rutledge and Smack the Pony to give it a go.

I can't imagine not doing what I am doing. But if i was unable to perform on stage I would be a writer, and maybe do a PHD. That would be awesome.

Or maybe working with Elephants.

Or swimming with Sharks. But I don't know what type of job would involve that predominantly.

I wouldn't mind living on a submarine.

My grandmother re-enacting Yoko Ono's Cut Piece when I was 7 for a lady from the WI's funeral.

There possibly has been, but when I am on stage all I focus on is creating laughter, so that is the only thing I pay attention to, and work out how to elicit it from the audience.

Marcel Marceau. I would love to learn all his tricks and have his grace and ability in his body.

This is my first year at the paid fringe with my solo show, Swan, which I am incredibly excited about. I can't wait to get to know the team at the Underbelly.

This is also my 4th year on the free fringe with my sketch show 'Hilda & The Spectrum' with my comedy partner Ryan Lane. I'll have to get back to you after August with my comparisons between the paid and the free.

Do your research, go to the festival first or talk to someone who has been there if you can't. Work out what you want to get out of it: develop your material? Hone your craft? Further your career? Develop a fan base? Experiment? Working out your objectives will help work out whether paid or free, full run or a shorter run is best for you. 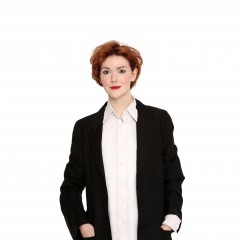 Elf Lyons takes some time to talk to Voice about the show, inspirations, and to give advice to young people.