My name is Rob Lloyd. I am an Australia-based actor, comedian and improviser. I am also a Doctor Who fan.

How would you describe your show? In my show Who, Me., I put the popular sci-fi TV show Doctor Who on trial, to see whether it has been a positive or negative influence over my life.

I love performing at the Edinburgh Fringe Festival! My first time was here in 2013 and I simply adored the sheer scale and size of the whole thing. The amount of shows, people and opportunities is like nothing else in the world. It's kind of addictive, once you've performed here once, you long to do it again. I'm so excited to be given the chance to return with Who, Me., and with the iconic Gilded Balloon as well!

The amount of people who actually come to see shows and experience the Fringe is very unique to Edinburgh. Most festivals I have participated in the broader community know nothing of the festival, however in Edinburgh, everyone is there to get involved. It's incredible.

I haven't been since 2013…so I'm interested to see if/how it has evolved.

I remember being in the Year Seven (Seventh Grade) and we were allowed to pick our elective subjects for the following year. I was immediately drawn to the word DRAMA. I thought to myself "you can do that as a subject?" From that moment on, I realised I wanted to perform for the rest of my life.

My biggest inspiration was my Year Eight English teacher, Mister Bruce Gordon. He was also the Artistic Director of the local amateur theatrical society. Mr Gordon directed me in my first six full-scale productions. He kept the passions burning and taught me so much about projection, focus, stagecraft, commitment to gesture and character and connecting with an audience.

Probably go back to teaching.

If they weren't on the verge of extinction…a video/DVD storeowner. Either that or run a small cinema that plays rare classics and cult hits.

Drawing a picture of me in the world of Star Wars.

I don't feel any pressure but I do feel the tremendous responsibility of doing a show that connects to so many people and there I need to make everyone feel included.

There has definitely been a shift in the view of the world. Everyone is receiving information on current events, not all of it is legitimate. Everyone is ready to defend and even fight for their opinion and voice to be heard.

All this does affect how I approach engaging with an audience, thinking through very clearly what I want to say in a public forum. I want to stay strong to what I believe but also make other people feel they are not being drowned out. It's a difficult balance to achieve but it is ultimately worth it.

So many Doctor Who gigs!

I would've loved to have worked with the late, great Patrick Troughton (The 2nd Doctor) actually. From all accounts he had quite a 'modern' approach to acting: very improvisational and experimental. I would have adored to work with him to create, explore and ultimately play around…not necessarily on Doctor Who but it could have been anything.

I know this was becoming a contentious debate when I was last here in 2013 and it appears to have turned into a major issue. I can see the benefits of performing in the free fringe especially for local acts, however for a act like myself, coming from overseas and also using quite a bit of technical assistance (lighting, sound, projection) the free fringe just isn't feasible.

What advice would you give to someone who wants to take a show up to the fringe? Do it…but be prepared! Edinburgh Fringe is a long, tough slog. It's an intense all consuming ride that can wreck you unless you're prepared.

Remember to see as much as you can but also remember to rest, have downtime and also have a support network. It's important to be able to take a step back at times to reassess, revitalise and then jump back into it. Edinburgh is a marathon, not a sprint.

Who, Me. is performing at Gilded Balloon Rose Theatre at 20:15 on 2nd – 28th August. For tickets and more information visit the Ed Fringe website. 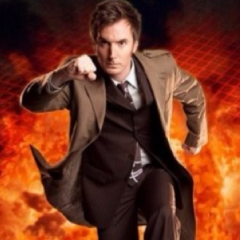