Dane Baptiste takes some time to talk to Voice about the show, inspirations, and to give advice to young people.

My name is Dane Baptiste, I am a comedian and writer. But generally just another being of consciousness piloting a carbon based vessel originating from creator.

My show is called GOD. It's about the idea of worship, Good, Evil, War, Famine, Pestilence, Death, Life, Pride, Envy, Lust, Wrath, Sloth, Greed, Gluttony, Hate and Love. So, all the normal stuff really. Like a trip to Ikea!

Where comedy is concerned, it's the largest arts festival in the world, so where better to peddle your musings than the largest hub for comedy on earth. It's the World Series, but not in the American way, where only Americans are involved.

The Fringe differs from other festivals due to the scale; there are more shows, acts and alcohol consumption than most other comedy festivals, and I've been to Australia twice!

The fringe has changed, since I've been. I was nominated for my debut show, which turned out to be the first nomination for a black Briton. Since then the landscape has gone from Mackie's Vanilla Ice Cream to Baskin Robins 31 flavors and it's a great thing to see such variety. Would really like if we could work out how to save more paper though. So many flyers and posters!

I'm not that good at most other things; I'm a jack of all trades, master of one. Which is already a comedy show, so I had to find another angle. I'd say my inspirations are probably similar to most other comics, we all know the greats, but my fellow comics on the day to day hustle are the most inspiring people to me. They don't think "I SHOULD BE THINKING ABOUT A FAMILY" like everybody else.

Receiving a written warning at whatever job I was at; because Dane doesn't work well with others. Especially within a paradigm of corporate sponsored nepotism, elitism and incompetence manifested as micro-aggression. Or on YouTube watching rap videos.

Batman. Just fighting injustice in body amour. But targeting the Big Fish instead of harassing petty street level criminals like Bruce Wayne does.

Drinking milk in front of the television next to my sister. Then it's a blur. Then I'm like 7 and it's Christmas eve and I'm peeking at presents then turning them over to hide the rips.

Social Commentator isn't necessarily a moral obligation, but if you're claiming to have talent in making relevant observations, you'd have to be clued up to what's happening in the world.

Not at all. In fact, the recent changes in the zeitgeist of the public has proven most of the things I said in the past to be true in the first place. It's like being Jeff Goldblum in disaster films, "I tried to tell you guys, now look where we are!"

Dick Gregory. He was the first Black comedian to appear on television, marched with Malcolm and Martin AND at 84 years old, requires no medication. Also, been a vegan for over 30 years. There's nothing in comedy and society he hasn't seen, and I'd love to pick his brain.

I guess a ticketed event seems organised and there's an air of professionalism, people are suspicious of things if you give them away. However, money doesn't grow on trees and sometimes people would rather see you on a showcase where they get more comics for their buck. The free fringe makes you accessible, and removes any pretense from your show as well as letting you avoid Fringe politics to extent. The downside is you get what you pay for. And where venue hire and promo are concerned that can lead to big shiny cluster fudge of a run at the fringe.

Have a plan! The Fringe is enormous and it's easy to get lost in a sea of other comedy hopefuls, and you want your debut into the industry to be a prosperous one. So don't feel pressure to go because everybody else is. Don't go until you know you're saying EXACTLY what you want to everyone you want to. And save money! Save money! SAVE MONEY!!

Or alternatively you can sacrifice a yard fowl to Baron Samedi. 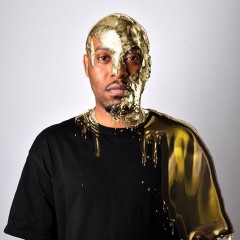 Dane Baptiste takes some time to talk to Voice about the show, inspirations, and to give advice to young people.