David Correos takes some time to talk to Voice about the show, inspirations, and to give advice to young people.

My name is David Correos, I am a comedian from New Zealand.

I am doing a show called Chaos and Order with Matt Stellingwerf.

Cause it's the biggest fringe festival in the world! Also, because I want to try deep fried pizza

I've only performed in New Zealand and its tiny over there. Doing this many shows is so exciting.

This is my first fringe festival

I was a debt collector and realised that wasn't the job for me. So, I thought comedian would be a good alternative.

The first proper comedy show I watched was Sam Simmons. He inspired me quite a bit. I also love Bobby Lee, Dave Chappelle and Patrice O'Neal

A pyro-technician or a guy that puts hot dog buns on those bun warmers, working in a hot dog truck.

Doing a school play when I was six and making the whole set and stage fall to pieces.

Nah, I don't bother with rape jokes or putting down the LGBT community so my jokes don't really irk anyone the wrong way.

My stuff can be disgusting though. I've had people walk out of my shows 'cause I did some rank shit on stage for a laugh.

Probably hang out with the person who first discovered and drunk cow's milk. See what his life was like. Heaps of teats around.

Either that or work with a butcher when pork belly was still really cheap. That would be good.

I'm not sure. Don't have enough experience

David Correos and Matt Stellingwerf: Chaos and Order is performing at The Gilded Balloon at 19:00 on 2nd – 28th (not 14th). For tickets and more information visit the Ed Fringe website. 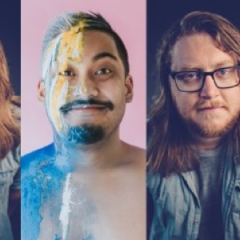 David Correos takes some time to talk to Voice about the show, inspirations, and to give advice to young people.