Casa Kim, the art director for GrueJarm Productions takes some time to talk to Voice about SNAP!, inspirations, and to give advice to young people.

Hello, this is GrueJarm Productions, we will be bringing SNAP! to the Assembly George Square Theatre this year. We are producing a show based on interdisciplinary arts such as magic. I'm Casa Kim, the art director. Nice to meet you!

This enormously entertaining magic show boasts a cast of Korea's greatest illusion artists in an enchanting, engaging and hilarious show like no other. A contemporary mystery magical show, SNAP! is a multi-faceted, ingenious show combining moments of classic comedy theatre with a unique stage language, magic and illusion. The cast of seven award-winning performers - huge stars in their own country and masters of their craft - bring to life characters such as The Alchemist, The Florist, The Dreamer, The Trickster and a host of others to stage a fabulous fantasy experience for Fringe audiences.

Performing at the Edinburgh Fringe was everyone's bucket list item. Last year, we prepared for a very long time to perform at Assembly George Square Theatre and successfully completed our first ever Fringe, with much praise from our audience, the press, and fellow artists. There were lots of people at the Fringe who encouraged us to return and because our cast had thoroughly enjoyed the experience, we decided to come back for the second time! We're quite excited.

The Edinburgh Fringe is truly a dream for artists who hope to set foot on the world stage—like a stepping stone. Fringe performers, organisations, audiences and Fringe staff all play an extremely important role and are so driven by their passion, which makes the Edinburgh Fringe an arts festival unmatched in its calibre. It definitely is a world-class production that meets the massive scale of the festival.

All of us worked for a long time in various magic performances, festivals, and TV broadcasts. We were inspired to act on our desire to make our very own performance and chase the world stage after watching Stomp in London's West End. It was such a unique show, with a creative performing language, and it motivated us to think more about creating a performance with a strong root in magic but with an idiosyncratic mix of stage language. Above all, our biggest source of inspiration is our audience—our eyes and ear are always open to their reactions and we learn immensely from their feedback.

Our members have so many talents beyond magic and performing! They're creative in various aspects of their lives and I am sure they would have been touching the hearts of the public in other ways. Personally, I like cooking a lot but in terms of careers… I think I would be teaching!

For six years from when I was six years old, I learned how to play the violin. However, it was not by choice so I wasn't able to enjoy the experience. Around the same time though, I found myself getting lost in novels and poetry, which have been an ongoing source of inspiration, joy, and have mentored me in many ways throughout my life.

SNAP OUT OF REALITY!

John Denver, the country singer from the United States. I've dreamt of attending his concerts. His messages to the world and nature have reached millions. In middle school, I loved his songs so much I listened to his tapes until they wore out!

Snap is performing at Assembly George Square Theatre at 15:00 on 3rd – 28th (not 14th or 21st). For tickets and more information visit the Ed Fringe website. 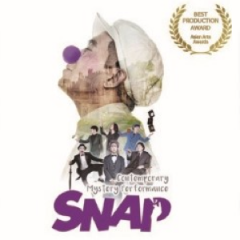 Casa Kim, the art director for GrueJarm Productions takes some time to talk to Voice about SNAP!, inspirations, and to give advice to young people.