Ben Fogg takes some time to talk to Voice about the show, inspirations, and to give advice to young people.

Namaste muthaf*ckers, it's Fogg o'clock! The child genius, love-maker and Twelfth best Championship Manager player in the world (2012) is here to change your lives.

HOW I WON BEST NEWCOMER 2017 is packed full of joy, laughter, wisdom, and defiantly on-trend headband action. I combine jokes and true stories from my, frankly incredible, life with a level of humility that would make Ghandi blush.

Plus I've thrown in plenty of positive advice about how you can be as successful as you deserve. This show is an autobiography, a sermon and a pool party rolled into one. Prepare to lean about me (and yourselves) while soaking wet.

Why wouldn't I? It's a hillwalking holiday meets an acid flashback. Plus, the hour-long slots mean I get to talk for three times as long as I do in a club set.

At the fringe anything goes. Audiences are up for whatever we throw at them so we get to do jokes, stories, tasteful nudity and, in my case, inspirational life changing wisdom. All that and the soothing sound of bagpipes on every corner. What more do you people want?

Here's the news: things get better with age: Wine, comedy festivals, headband-wearing comics. Maturity is the only true indicator of quality.

I'd already completed film, advertising, and virtual football management, comedy was the next peak I had to climb. I'm more used to inspiring than being inspired but if pushed I'd say Larry David, Andy Kaufman, Tina Fey and Anthony Fogg (1950-2015).

When I was 19 years old I was the youngest ever associate producer in US television history. I had an assistant, an apartment in New York and a six-figure salary and yet I gave it all up to become a comic. My show is about why that decision was 140% correct.

The first time I made a joke I was six years old. My parents had friends over for dinner and I dropped a razor-sharp riff about Arthur Scargill using an ice cream cone as a microphone. I noticed that adults suddenly treated me with an admiration and respect that had been sorely lacking beforehand. That was the first metaphorical step on my journey to the becoming the comic genius I am today. That cone should be found, framed and sold to a museum.

I don't presume to tell people how they should feel about society but more often than not they choose to see everything I say about life, love and success as 100% correct, so I guess I'm more than a commentator, I'm an icon. Which is handy because it gets me out of writing topical stuff that goes stale in a week.

Absolutely. Over the last 12 months I've noticed that the public have been more and more divided. Often when I'm gigging half the crowd like my set and the other half absolutely love it. It can be hard to keep going when the room splits like that but I soldier through.

It came after twenty sixteen.

Dr Dre. Because he's never made a single career mistake and nor have I.

The free fringe is fantastic. It allows you to take huge comedy risks confident in the knowledge that, because they haven't paid up front, the crowd aren't invested in your career whatsoever. Often they're just indoors sheltering from the Edinburgh summer. On the downside, an abandoned railway arch isn't always the perfect location to talk about how correct your life choices have been.

A ticketed show blasts you into a whole new market. Yacht owners, venture capitalists and the wives of foreign dictators will all see your show, essentially guaranteeing you'll become a household name in Moncao. But if you're not careful you'll get wrapped up in your own success and lose your edge. That's why I start every gig by handing back £10 to each audience member and then demand it back before I let them out. Genius.

If I had one piece of advice for anyone looking to go into comedy it would be: DON'T. It's competitive enough as it is without a whole bunch of talented young upstarts muscling into the biz. Become an engineer, build a bridge, I bet that's satisfying. Just don't do what I do.

I'll be changing the face of live comedy every day at 4:45PM in the Pleasance courtyard (Below).

Ben Fogg: How I Won Best Newcomer 2017 is performing at Pleasance Courtyard at 16:45 on 2nd – 28th August (not 14th). For tickets and more information visit the Ed Fringe website. 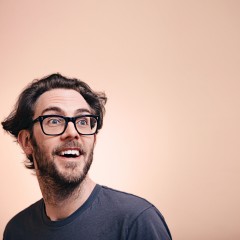 Ben Fogg takes some time to talk to Voice about the show, inspirations, and to give advice to young people.