Terry Alderton takes some time to talk to Voice about the show, inspirations, and to give advice to young people.

It's going to be a mad one… It's three shows, maybe five shows, in one. One will finish and the next one will start but its the same show… Confused? It's also featuring Johnny Spurling. Bring the chaos...

Because it's what I do… I'm a comedian and there is only one place to showcase a show. Also, to be apart of the biggest arts festival on the planet is just great.

Size!!! And also, the festival is geographical position is just brilliant, plus you can't beat the Edinburgh crowds!

I do feel the festival has changed. I feel it's become too commercial. Not as much punk as I would like to see. Having said that, if you are a punter it must be fabulous.

The reason I came into this business of show is because I didn't have a proper job. And also, I have been always one to entertain. So it was a natural progression. As for inspirations, they came later...

No, I consciously keep away from all of that. I don't read papers I don't watch the news. The only way I socially commentate is on what I experience day-to-day.

Not that I have noticed.

Adolf Hitler, to convince him that he might be slightly deluded!

This is a hard one for me to comment on, as I've never done the free Fringe.

Make sure you can afford it, make sure you truly believe in the show, and don't worry about the bastard critics.

Cabaret bar at the Pleasance Courtyard every day at 22:40.

Terry Alderton: All Crazy Now is performing at the Pleasance Courtyard at 22:40 on 2nd – 27th (not 14th). For tickets and more information visit the Ed Fringe website. 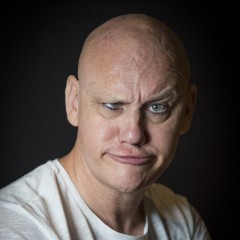 Terry Alderton takes some time to talk to Voice about the show, inspirations, and to give advice to young people.