Voice MagInterviewsInterview with Tez I…

Tez Ilyas takes some time to talk to Voice about the show, inspirations, and to give advice to young people.

It's the biggest and best arts festival in the world. It's a great place to be seen by comedy fans and the industry, but most importantly, it's just so much fun!

The sheer scale of it. It's long and has girth. Plus all your mates are there!

Not for me really, I've only been coming for the last five years. I guess Edinburgh has a wider range of places to eat now, I'd say.

I honestly fell into this by accident. I've got no drama background and had no ambitions to do this, let alone let it be my career. My inspirations when I first started were Peter Kay, Chris Rock, Russell Peters, Jimmy Carr and Eddie Murphy. Now it's more Stewart Lee, Josie Long and Kevin Hart.

Probably still be in the civil service, saving lives and correcting grammar. Each of which is equally important.

This has to be up there, I love it… Though, if I had the talent, discipline and heart, I'd love to have been an elite professional boxer.

That I was rubbish at drawing and I would heckle the school assembly.

Yeah, I think because I'm a young(ish) British Muslim, I'm often looked at to provide a comment on current events.

Oh yes. Society is a lot more Islamophobic now, than even seven years ago when I started. It's worrying, but I reflect that in my work.

Muhammad Ali. For sure. He was so funny and brash and brave and didn't care about niceties to hold onto his principles.

Do it. Work hard, practice it to death. Don't half arse it, there's lots of good people who don't get rooms, so if you do, treat it as a privilege and do yourself and your industry justice.

Tez Ilyas: Teztify is performing at Pleasance Courtyard at 20:30 on 2nd - 27th (not 16th). For tickets and more information visit the Ed Fringe website. 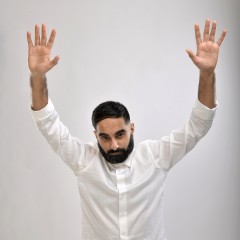 Tez Ilyas takes some time to talk to Voice about the show, inspirations, and to give advice to young people.