Annie Sertich takes some time to talk to Voice about the show, inspirations, and to give advice to young people.

I'm an American actress who is a Main Company member of the world-famous Groundlings Theatre in Los Angeles (alumni include: Will Ferrell, Kristen Wiig, Phil Hartman, Lisa Kudrow, Melissa McCarthy) where I perform and direct improvisation and sketch comedy regularly. I've appeared on shows like HBO's Silicon Valley and Curb Your Enthusiasm, 2 Broke Girls (CBS), Shameless (Showtime), Dirty 30 (Lionsgate) as well as written for MTV and Disney. For over two years I was also a correspondent on The Tonight Show with Jay Leno.

My show is a true story based on a time in my life that I fell into what I call the sh*t bucket. It's a story about grief and loss while trying to continue life in Hollywood, and then an ending you could never predict. Really.

Directed by SNL's Michaela Watkins and written by Annie.

The opportunity was presented and it scared me. That's when I knew I had to say yes. I'm a terrible flyer (which you can follow on my Instagram account @anniesertich and my need for #flightdrugs) and doing a show this far away from my home theater at the Groundlings felt insane, but, I do believe that's how we grow as artist.

I'm excited to find out. Here in Los Angeles, there isn't a time when the town shuts down and supports theatre like this. How special to not only perform, but celebrate other acts!

I was going to be a social justice lawyer. Sure I did dance and theatre growing up, but it wasn't something this Midwestern gal could do as an actual career. I got to Los Angeles after college via a year of volunteer work and one rainy day walked into the Groundlings Theatre to use the restroom. I looked at the pictures on the wall...(Pee Wee Herman, Lisa Kudrow...) and thought, 'I want to get on that wall.' Basically that's like saying I want to win the lottery. Cut to three years later, law school kept getting 'pushed,' and I auditioned for my first class at The Groundlings with my teacher Cheryl Hines (Curb Your Enthusiasm). The rest was history.

As a kid I watched two movies on repeat. 'Xanadu' and 'Trading Places.' I quoted Olivia Newton-John, Eddie Murphy, and Dan Ackroyd non stop. But again, I was a serious kid on track to be a lawyer. Then, one of the first shows I saw at the Groundlings, Mike Myers was performing. I'll never forget what fun it looked like he was having. Pure joy. That inspired me.

Also I have a few authors that fearlessly bleed on the page: Lidia Yuknavitch, Rene Denfeld, Sheryl Sandberg. Read them now. Like stop reading this and go.

My dream would be to write, create, and act with all my friends. To start a production company that celebrates other 'weirdos' like myself and also to magically be able to sing like a Broadway singer/indie rocker. That's all easy, right?

My father took me to see 'Annie' at a theatre in downtown Detroit with my little sister and Grandma. Tenth row. I smiled with my fang teeth and pig tails. From then on, I knew, art could ignite something inside that felt awesome.

Not really. In improv comedy it's good to know current events however there is also a guideline we try and remember which is 'be an expert' on any topic. So if you don't know, you make it up! However, I feel it's my human duty to stay awake and informed.

The pressure I do feel is to create as a writer and actor AND keep up with social media. That isn't something I know how to do well (hence my 180 Twitter followers).

I do think if you aren't 'awake' and informed, it's hard to stay specific. To me, comedy comes in the details.

Wait, our President did what?!?

Robin Williams. For all the reasons.

I can report back on August 28th? But what I can say is I have had such a supportive team that without them, I would for sure be in bed watching Netflix and eating chocolate covered almonds.

Annie Sertich: How to Not Kill Yourself for 30 Days... and the Next 330 is performing at Pleasance Courtyard at 20:30 on 2nd – 27th (not 14th). For tickets and more information visit the Ed Fringe website. 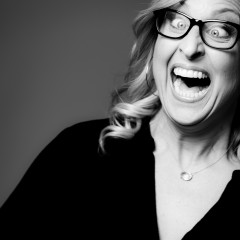 Annie Sertich takes some time to talk to Voice about the show, inspirations, and to give advice to young people.