Andy and Eve from Long Lane Theatre Company take some time to talk to Voice about The Giant Killers, inspirations, and to give advice to young people.

A: We met working on The Mousetrap in the West End, we got on so well that we decided to both set up a theatre company together and get married. We live in west London with our little dog. Eve is very pretty and very smart and I'm punching above my weight.

E: It's a proper play with four actors. It's got a right good beginning, middle and end. It's a true story. It's set in the 1870s when football was only played by the upper classes, then you had this team from a poor town in Lancashire go and join the FA cup and take on these rich folk. They go head to head. It's rich versus poor, the rulers against the ruled. Our play focuses on the four people who set up the mill workers team and the journey they go on. It's a real underdog story.

A: I love the fringe. Bit of promoting, then do our show at 2:30, get a beer by four and then watch something completely different every evening. I love work and I love holidays and the fringe feels like a combination of the two.

E: And it's the best place to launch a show, we want the fringe to be the start of this play's journey.

A: Eve did the Adelaide Fringe and said that was much more relaxed though.

E: Oh yeah in Edinburgh people are worried about their shows over running because they get fines, in Australia you over run and you tell the next performer and they're like "No dramas mate, I'll just cut ten minutes out of mine".

A: People say it's got bigger and more student-y but now I know my way around Edinburgh it actually feels smaller.

E: It's just so inclusive and so it should be. Good work finds an audience. There is a line in our play that goes "all you have to do to make something exclusive is exclude people." And I'm glad the fringe hasn't fallen in to that trap.

A: My aunt works at Pitlochry Theatre so I used to go and watch all the plays each summer. I've always loved stories, telling them or making them up and watching those plays as a kid made it very accessible. I was casually like "yeah I'll probably just be an actor when I'm older" it's only now I am one that I know how hard it is.

E: I just wanted to be Goldie Hawn.

E: Who knows? I've been fired from nearly every job that isn't related to acting.

E: A professional wine taster. Or a dog hugger.

A: My job (an actor) but more successful would be nice.

A: Watching a play called when I was four called 'The Singing Kettle' at Pitlochry theatre. I grew up in England and couldn't understand their accents. At various points we had to shout out "mince and tattys" And I had no idea what mince and tattys were. Then the fire alarm went off and I wouldn't leave because I couldn't find my bounty bar.

E: I went to watch Cats.

E: No, not really. I kind of feel it's an artist's job to share their own experiences. If they do that rather than focus on the outside world then there is far more chance of it being honest and unique.

A; The story we are telling happened nearly a hundred and fifty years ago, it has a lot to say about society but the story comes first and then people will take different things from it depending on what they themselves bring to it.

E: The amazing thing is we've wanted to tell this story for ages. It's about inequality and social injustice. And the closer we've got to doing it, that's felt more relevant. It feels like we're living in an age of anger where there is a rage building up and it's going to come out one way or another and that's what our play is about.

A: Ooh good answer. Dave Johns who played the lead in his last film (I, Daniel Blake) is at The Fringe this year. I can't wait to see his show. I'd have to go for Marlon Brando though – you know you'd either be in the presence of pure genius or pure madness and both would be exciting.

A: For us, we are taking up a team of people and building a show – with a ticketed event you can work out best and worst case scenarios in terms of budgeting. If I was a one man band stand-up comedian with a bit more flexibility I'd definitely go for the free fringe.

E: Get us much advice as you can from people that have done it before.

A: Second that, the first thing we did was meet with a producer, Denise Silvey, who brings a lot to the fringe. All of her little instructions were invaluable, so many things we hadn't thought of.

A: We are on every day at 2.30pm at The Rose Theatre (Gilded Balloon). We are in the studio, please come and see us..

E: Best place is Twitter. We are @LongLaneTheatre or if you want to read more about us our website is www.longlanetc.com

The Giant Killers is performing at The Gilded Balloon Rose Theatre at 14:30 on 2nd - 28th August. For tickets and more information visit the Ed Fringe website. 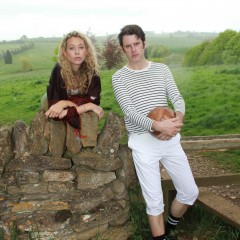 Andy and Eve from Long Lane Theatre Company take some time to talk to Voice about The Giant Killers, inspirations, and to give advice to young people.