Andrew Ryan takes some time to talk to Voice about the show, inspirations, and to give advice to young people.

I'm Andrew Ryan. Comedian from Cork in Ireland and based in the UK.

Basically, it's about why people say and do things that don't make sense and are hurtful to others. I got some pretty nasty comments last year and while I laughed it off it made me question why would someone deliberately want to upset someone. I explore that and lots more.

Purely so that I can walk to work everyday and not get a train or be on the motorway!

Well, I do think it is the best festival for Comedy purely down to the fact I don't have to leave the UK for it and it's full of people I know. A summer camp for comedians.

Well, it seems to be getting bigger in terms of acts and audiences which is great. The downsides are the costs. I mean, performers get fleeced yet they are the heartbeat of the festival. I suppose it's the system and I'm not going to beat the system on my own. It's a wonderful place and great fun.

I did my first gig when I was 14 and then it took 12 years to another one. I was working in a bank, got offered redundancy and just went for it. I was 26 at the time and it was the best thing to happen to me. Losing my job and getting that money!

I would probably be teaching Golf.

I've always fancied being a pilot or a train driver. Not having to deal with any co workers by my side.

I'm really trying to rack my brain here. Art was never a big thing in my life if am honest. I suppose Ireland beating Italy in USA94 for a work of art!!

Nope, I'm not responsible to inform people about the world.

I give my opinions but I never push them on people. I think Comedians should give different angles on topics. I try not to write topical material based on events and the last two years have shown, so many things are changing that fast that you would burnout from writing!!

Equally, do you think there has been a shift in public sentiment that has affected your work.

No, people just want a laugh in the good times and the bad times. I think things come in cycles. Basically you have boom years, everyone is okay, then the world crashes, people get angry and new people get voted in, the new people mess it up and everyone gets angry again and so on and so on. It's always up and down. The world is very different now, but in five years it will be all change again.

My grandfather was a boxer. He died in the 60s so I'd like to have gone to work with him for a day.

I have done both. Basically I like both and hate both. There is no right way to do Edinburgh. If there were everyone would do it. Free shows can be brilliant, but lots of work has to be done on the venue, set up etc. The sound and lights can sometimes not be great. Also, the audiences can be a bit different, as they have not paid so they can come and go when they want etc.

Paid event audience normally look up your stuff and come knowing what they will get. Normally the rooms are very well set up, air con, staff outside etc. it depends on what you like. For me, I like a paid venue as it takes away lots of added stress but it's expensive. I value piece of mind.

Do it. Expect nothing. Work hard and listen to people who have done it before. Lots of fun to be had. Tell you family you love them before you go.

Andrew Ryan: Did You Get Here Alright? is performing at Assembly Studio 5 at 18:45 on 2nd - 27th August. For tickets and more information visit the Ed Fringe website. 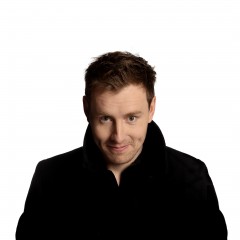 Andrew Ryan takes some time to talk to Voice about the show, inspirations, and to give advice to young people.