Andy Daly takes some time to talk to Voice about the show, inspirations, and to give advice to young people.

Yes. Hello, reader. How do you do? My name is Andy Daly and I'm an American comedian, actor, writer and improviser. Perhaps you've seen me on the television shows Eastbound and Down, Silicon Valley, Review, The Office (US version) or in the films Semi-Pro, Yogi Bear, The Informant. Maybe you've heard me on comedy podcasts? Well, whether you've heard of me or not, I will be making my Fringe debut this year and I'm VERY, VERY EXCITED ABOUT IT!!

My show is made up of monologues by characters that I created for comedy podcasts, most notably Scott Aukerman's Comedy Bang Bang. But it's also a highly interactive and largely improvised show as each of the characters I play open the floor to audience questions. So people should come prepared to get involved or else sit in lots of awkward silence, which might be great, but probably would be bad.

Edinburgh has always meant a lot to me. My grandfather grew up there and I spent a memorable vacation in Edinburgh as a teenager. Years later, my wife and I spent part of our honeymoon there as well. Getting to perform in such a beautiful, fun and friendly city is something I've wanted to do for a very long time. I also have a hunch my style of comedy will play well in Edinburgh. I guess we'll find out!

This will be my first Fringe so I don't really know, but I'm expecting audiences to be smart, sophisticated, welcoming, fun-loving and game for anything, even a very weird show like mine. Given the incredible diversity of shows at this festival, my guess is that Fringe attendees are an especially adventurous and open-minded crowd.

To be clear, this is my first time at the Fringe so I have absolutely no idea. Having said that though, I have no doubt whatsoever that the Fringe is just getting better and better every year and that this year will be far and away the greatest in the history of all festivals throughout the world and across the centuries. I'm basing this on nothing, but it feels very right!

As a kid, my big heroes were John Belushi, Steve Martin, George Carlin and Martin Short. Later I got into Charles Grodin, David Letterman, Hunter S. Thompson and Andy Kaufman, who had a major impact on me. It became clear to me early in life that I was not going to be good at anything other than performing and trying to make people laugh. I was just never able to apply myself to anything else. So it was either this or misery!

It's hard to imagine. Maybe a not-very-good journalist? Or a mostly failed politician? Or maybe I'd be taking a zen-like approach to a low-skilled job like washing dishes and also living somewhere beautiful. That sounds okay, kind of. I have often fantasised of opening a shop called 'Knot a Problem' where people bring their knotted up cords and shoelaces and I untangle them for a fee. I don't know what people would pay for such a service, but I suspect the answer may be zero. Zero money. Which is why I haven't done it.

Apart from untangling cords for millions of dollars a year, I would honestly love to have a regular role on a long-running, popular, critically acclaimed, hilarious TV show where the scripts are incredibly good and I'm given free reign to improvise and my co-workers are all lovely and the director always brings out the best in all the actors. I've been lucky enough to have had most of those experiences, all except for the "long-running, popular" part. But I'm still aiming for it.

I remember seeing a great production of Peter Pan in New York when I was in the first grade. Sandy Duncan was Peter and Christopher Hewett was Captain Hook. The whole thing was mesmerising but there was a particular moment when Captain Hook told Smee "I will get that Peter Pan" and a little boy in the audience was so wrapped up in the action that he yelled back "no you won't!" and Christopher Hewett looked right out into the audience and instantly shot back "oh yes I will!" in such a deliciously evil way. That might not sound like much, but it was really such a genuine, magical moment and it brought the house down. It made a major impression on me. I was there for something that didn't happen every night, something special. I've often thought that experience must have played a role in inspiring me to pursue comedy improvisation.

I wouldn't say pressure, but I do feel that people will get more out of a show if it seems relevant to the world we're all dealing with together. My show includes some thoughts on current events that I feel are subtly handled. I like the idea of giving people something to chew on, but my stuff has never been overtly topical. On Twitter, I do feel that the size of my audience makes it necessary for me to help amplify certain important messages and I do that often. Sometimes I try to do it with humor but most of the time, I'm really just begging people to call their Senators!

Some questions are harder for me to answer because I am not a traditional stand-up, either in the content of my material, which is very character-based, or in my approach to performing, which is to say that I seldom tour and am much more likely to perform on a podcast or an improvised show than to generate material for the stage. That said, in America, the people I am most likely to perform for haven't experienced any kind of shift in sentiment. They may have become more active and concerned and passionate, but we've all been on the same page more or less all along. And I think they turn to me to shock and amuse them rather than to instruct them or mobilise them, and I'm more or less doing that the same as ever.

I haven't slept very much.

I would love to work with Bill Murray right now. I think he has aged into such an interesting artist, in addition to always being hilarious. I'm sure I'd learn an enormous amount watching him work and, if I ever got over being such a nervous fan, have a lot of fun too. Also David Lynch or Wes Anderson. I'm always happy to work with a director who's committed to both trying crazy things and taking care of his/her actors. I think those guys do that.

Again, my status as a first-time Fringer makes this hard for me to address. I honestly just asked some people in the know for some good advice as to how to go about this Fringe thing and I did what they told me. I'm doing a ticketed event. But, as someone who has done tons and tons of free comedy over the years, I know the appeal of that well. Art for art's sake, if I can use that hifalutin expression, makes for a very pure experience for performer and audience. The whole 'pay me what you think this is worth/whatever you can spare' idea is a noble one and I dig it. At the same time, I'll be grateful to defray some of my costs and will certainly do my best to make sure the show is well worth the tickets.

My advice would be "don't ask me, I've literally never done it". Then I'd tell them to call Rich Fulcher, which was my first move. He's a peach of a fellow and really made this whole thing seem feasible to me. So call Rich. Lovely chat.

I'll be performing in the Wine Bar at the Gilded Balloon Teviot from the 3rd to the 13th of August at 20:30, all of those nights.

Andy Daly: Monsters Take Your Questions is performing at Gilded Balloon at 20:30 on 3rd – 13th August. For tickets and more information visit the Ed Fringe website. 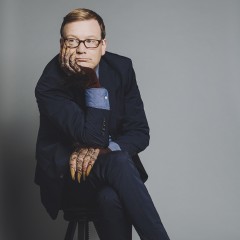 Andy Daly takes some time to talk to Voice about the show, inspirations, and to give advice to young people.