Serin Ibrahim, Artistic Director of CultureClash Theatre takes some time to talk to Voice about Under My Thumb, inspirations, and gives advice to young people.

Hello, I'm Serin, Artistic Director of CultureClash Theatre and I play Ree in Under My Thumb, our co-production with Greenwich Theatre.

Under My Thumb is set in a non-specific time and place where five women have been imprisoned for alleged crimes against society - a society that refuses to acknowledge inequality or abuse against women, preferring to hide the victims in a growing network of women's prisons until they agree to accept the blame or deny that the event even happened. United by their belief in their own innocence, the uneasy peace that the five women have built between themselves is disrupted by the arrival of a sixth woman – but is she another victim brought down by the increasingly oppressive society outside or is there something more sinister going on? The show is a bold thriller played entirely by women, a social and political manifesto inspired by injustice, and a great hour in the theatre.

The Edinburgh Festival Fringe is the biggest arts festival in the world, home to the newest theatre makers and the most established theatrical heavyweights. It is the perfect place to showcase social and political work to audiences from around the world, and for a company as new as ours, the best opportunity to be seen by industry contemporaries, critics and potential collaborators. Our company started life at the Edinburgh Festival Fringe in 2015 when we revived John Retallack's Hannah and Hanna. Now, having refocused our company to work on new writing, there couldn't be a better place to show our latest work.

It's visa free so the amount of international work is huge. There is literally theatre all day and all night, so when you come home afterwards it feels wrong that you can't go and watch a show somewhere at 10am or 1am. It is the only festival I know where an entire city is literally given over to a celebration of the arts for a month.

The Fringe is constantly evolving. I've been going for the last 6 years and in that time the audiences have definitely changed. Audiences are getting more and more excited about the festival atmosphere. With small festivals of anything from theatre to science to food popping up in towns all around the UK, audiences more readily understand the fact that it is not just a series of shows – it is an atmosphere, an opportunity to socialise with like-minded people, a chance to enjoy trying something new. It means that more and more people are coming to the Fringe who are not necessarily regular arts attenders for the rest of the year.

I have always loved the idea of telling stories, creating characters and taking an audience on a journey. I always loved watching Julia Roberts when I was young – her versatility really inspired me. I am also inspired by classic actors like Audrey Hepburn for her effortless performances, and Samira Wiley and Elizabeth Moss for the types of roles they take on and for their commitment to portraying real women. Actors like Emma Watson and Viola Davis are also a huge inspiration for the work they do for women both in the industry and in wider society.

Probably doing drama therapy with young offenders in prison. It's something I always wanted to do and still might one day. I think drama skills can really help people who struggle with education. I believe that everyone deserves a second chance and sometimes you just need someone to give these young people the time and opportunity to start again.

I would love to be on a gritty British drama – until recently, television drama seemed to be on the wane with the explosion of cheap reality TV, but it feels like there is a resurgence happening now. Whether it's because UK television makers can now export their productions around the world or because the massive rise of Netflix and Sky have led audiences to demand higher quality writing and production values, British TV drama is on the rise and I'd love to be involved in that.

I'm not sure how old I was, maybe 6 or 7, but I remember my mum reading The Little Matchstick Girl to me. It was so beautiful and sad all at the same time, I think that's where my love of stories started. I also loved reading Roald Dahl books and then creating my own characters and dressing up in my mum's clothes and putting on shows in the garden.

I don't feel pressured - it's something that I want to do. We are constantly fighting for equality and in the arts that is still a big issue (men still outnumber women on stage and off) so it's something I want to do. That's why we chose this ensemble piece for 6 women from different backgrounds.

In relation to this show in particular, the most frightening shift in public sentiment is a growing perception that we have achieved equality. We need to make it clear that the change is far from complete, that women are still limited at work, are still the victims of emotional and physical abuse and still lack a voice in many environments. There have been moments in history when gender inequality has been the subject of political and public debate, the cause of protest. There is a risk now that some change is seen as enough change.

I think probably Emma Rice. Her productions with Kneehigh are among the most memorable shows I've ever seen, her time at The Globe has been incredibly exciting and brought the venue and its work to a much wider audience. I can only imagine what the future will bring and I'd love the opportunity to work with her.

If a project is funded (meaning the actors are getting paid along with the company etc) then I feel the free fringe is an incredible opportunity for people to see and share work and is a great opportunity to develop new audiences. Ticketed events place a show in a particular context and, at Edinburgh, in a competitive environment. Ticket income is essential for the unfunded shows, but working on ticketed show also makes a company develop skills in marketing and PR.

New writing is key. Original work is more popular than ever. Make theatre you believe in. Network as much as you can. Don't be afraid to make mistakes.

Under my Thumb is performing at Assembly Roxy at 16:10 on 3rd - 20th (not 14th). For tickets and more information visit the Ed Fringe website. 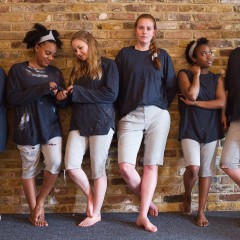 Serin Ibrahim, Artistic Director of CultureClash Theatre takes some time to talk to Voice about Under My Thumb, inspirations, and gives advice to young people.