At this year's Activist Training Day, I caught up with former northern Activist and now Voice staff member, Bhavesh Jadva, to find out more about what he's been up to.

What do you do now as far as job, studies, and hobbies are concerned?

I work as the editor behind the website you are on right now! In particular, the Arts Award section on Voice. My hobbies include mostly film and television, I'm quite the introvert as far as leisure is concerned.

Favourite memories of your time on the team?

The team themselves were a highlight. It's nice to have that balance between team-mates and also great friends, as everyone was committed to what they were doing and were very enthusiastic about their art forms and supporting the art forms of others. It was a very inclusive atmosphere with everyone cheerleading everyone else, which was a great motivator. There's so much to learn about and laugh about with the team! Especially crazy golf, where sometimes 'crazy' is taken a bit too literally...

What activities did you take part in?

All sorts of different activities, such as: public speaking at conferences, networking events at The Lowry, consultations, promoting Arts Award at public events... the list could go on! Mozfest (Mozilla Festival) is a recent public event which springs to mind; where I got a chance to learn about the latest revelations in the technology world and also seeing how they overlapped with the arts. I guess that's a key advantage of being a part of the team, that there were many opportunities to build leadership skills as I was often talking to new people and problem solving with my team.

What culture have you seen/been to lately?

I like to watch a lot of films, so I like to indulge in 'low effort culture' which basically involves any reason not to go outside. My current likes are Locked Up, The Handmaid's Tale (the new TV series, not the book) and The Unbreakable Kimmy Schmidt. Time is made for the classics, but why not indulge in the Mean Girls kind of stuff? My taste is, sometimes, geared toward the thought-provoking, like I say. For example, a play I recently saw at The Lowry, which looked at the effects of hallucinatory drugs as therapy for PTSD sufferers.

Advice for Activists on how to make the most of the team?

Communicate with each other! Not just about work, but about social events and seeing what everyone is up to. This is a great opportunity to build contacts and network, so you can progress forward and perhaps make your own work together? Even if you don't end up making stuff with each other, which isn't terribly likely because the team is representative of all the regions, working with each other on projects remotely on and off the team is definitely on the cards.

Like this year, I'm helping Tom, who joined the team at the same time as me and is now the Content Editor for Voice, to programme our time reporting from the Edinburgh Fringe.

Communicate with staff with what you need to tell them about, such as basic time keeping things, which I have been guilty of myself!

What more could we do to support young people in their life after Arts Award?

By providing more contact with Activists, so that they can ask for advice or to help them to network with an other young people across the arts world! We're all about getting young people better access to the arts. A way in to the Youth Network is like a golden ticket into a new world, with so much to learn and so many talented people to talk to. 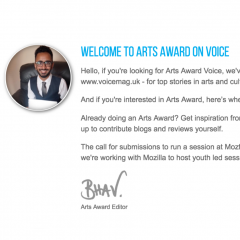 Where are they now? with Bhavesh Jadva

At this year's Activist Training Day, I caught up with former northern Activist and now Voice staff member, Bhavesh Jadva, to find out more about what he's been up to.