At the 2017 Museums and Heritage Show, I caught up with Holly Bee, Education Officer at GEM...

My name is Holly and I am the Education Officer at GEM. GEM is all about education in museums and supporting anyone in heritage learning. We want to anyone who has an interest in heritage and we support young people with networking and training and any other advice they need.

What projects are you working on currently?

At the moment we're working on a project funded by Arts Council England and it's called our Learning and Sharing Centre. We're trying to make GEM more sustainable by providing a lot more training and a lot more networking and, since we've never had Arts Council funding before, it's definitely a chance for us to expand and develop just a bit further than we have before.

We'll be providing five intermediate courses, which are one-day workshops each with different specialised subjects within museum education. We are also running a foundation course and that's based over three months. It has contact days with site visits and seminars. And you also spend half the time in your own workplace reflecting on what you do and working with others around you. And there's also an advanced course for managing museum educators to learn from each other and expand.

There will also be a series of networking and sharing events that will hopefully allow people to get better connected. One of the major things about GEM is that the sector is very small so we want to give people the opportunity to really meet others from their own field. We want to make GEM a stopover for anyone who wants to get into museum education.

What's been the best part of your job so far?

The best part of my job so far has probably been the networking side. We always want to hear from our members and get out into the sector and find out about what they're up to.

I also loved running workshops. So we chose five different areas and went out and provided a workshop in each area just to really find out what they want and need from GEM. What kind of training, what kind of events, all that sort of thing. And that was really, really great for me because I got to learn a lot about what's going on in the sector.

What's the most challenging part of your role at GEM?

I think that when you're working on a project that's funded externally, there's a lot of pressure. You have to run to someone else's schedule. You have to be prepared for absolutely anything! But on the other hand it's very motivating in that you always want to get to the next step and always want to make sure everything's to the standard that's expected.

What sort of audience is GEM targeting?

So GEM's traditional audience is museum officers and educators – people who have museums to run – and also obviously anyone trying to get into the sector. And a learning officer will want to encourage the whole community into their museum and that's one of the biggest things we want to share at GEM: it's not just about schools! Anyone and everyone can be a museum learner.

Want to know what it's like to work in education? Visit Creative Choices, a careers website filled with advice on getting a job in the arts. 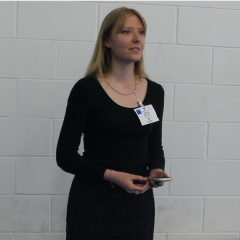 At the 2017 Museums and Heritage Show, I caught up with Holly Bee, Education Officer at GEM...