Voice talks to managing director and co-founder of Komedia

Could you first introduce yourself to our readers?

What was your background before entering the entertainment industry?

I was a teacher of English and Drama.

What enticed you to enter the entertainment industry?

The enjoyment and pleasure taking part in school plays – sadly I wasn't chosen because of my acting skills which are at the most average, but I did have a strong, booming voice which could be easily heard from the back. I was also tall so perfect for Little John in Robin Hood!

In addition to comedy, Komedia also deals with music, theatre and live performances. Out of those, do you have a favourite medium of entertainment?

We love comedy but I have to say our favourite art form is theatre. The founders of Komedia David Lavender, Marina Kobler and myself ran a touring theatre company called Umbrella Theatre before we opened Komedia and theatre has always been our first love.

As the co-founder and MD of Komedia What does a typical day look like for you?

I start off by reading show reports from the previous night, answering emails and dealing with any urgent Komedia business. And then – because we have such a marvellous team of managers and staff at Komedia who run the day to day operation of the venue so brilliantly – I can work on my new project: the development of a children's touring theatre company, associated with Komedia, and called Theatre Fideri Fidera.

Have you noticed any changes in audience tastes or behaviour in recent years?

Komedia has developed an amazing comedy audience in Brighton over the last 23 years and that audience has become increasing more discerning and interested in a whole range of comedy from stand-up to solo shows by new and upcoming comedians.

Komedia expanded into Bath in 2008 - a year where many companies were downsizing. Did you find that live entertainment was impervious to the financial crisis?

We opened Bath just before the crash and the first five years were difficult for the new venue but it is now established in the city and doing well.

There are three arms to the Komedia Group. Could you explain a little bit about each, and how they work together?

Komedia Productions is a registered charity and does all Komedia's children's work. It is supported by the commercial arm, Komedia Ltd which subsidises the charity's work with profits for the more profitable parts of the programme: comedy and music. Komedia Entertainment Ltd represents artists that have developed their work successfully at Komedia. The character comedian Count Arthur Strong has been our most successful act so far with series on BBC and lots on national touring.

How does Komedia Entertainment decide who it is going to work with and help produce?

We choose acts that have been successful at Komedia and which have potential for broadcasting or national touring.

What has been your biggest success to do, or an achievement you're most proud of?

Surviving as an independent arts and entertainment venue for the last 23 years.

Conversely, what has been the biggest challenge you've had to overcome?

The loss of our arts funding in 2005 and getting through the financial crisis.

Where would you like to see Komedia expand into next?

Taking our model of a self-sufficient independent arts venue to other cities.

Komedia used to have an active presence at Edinburgh Festival Fringe. Why did you decide to pull back?

What are some of the differences between the Brighton and Edinburgh Fringes?

The size of the audience. Edinburgh is in August and so it attracts people from all over the UK and abroad, who take their holidays then. It also attracts national and international press and media and a huge number of promoters like Komedia looking for shows. Brighton in May attracts people at the weekends but not during the week as it is not a month when people take their holidays,

Who are some of your favourite performers at the moment?

Sorry, there are too many to say but a lot are appearing at Komedia this May!

What has you really excited about the industry at the moment?

That people seem to have a renewed thirst for the live rather than the recorded or broadcast.

What do you suspect may be some of the challenges facing the live entertainment industry over the next few years?

Cuts leading to theatres and live venues that depend on subsidy closing.

If you could give your 16-year-old self one message, what would it be?

If you could have any other job in any industry, what would it be and why?

I've already had it and gone back to it – publishing. I used to write for teenagers and now writing children's picture books to go with plays like Oskar's Amazing Adventure.

What advice would you give to someone who might want to enter the comedy industry?

An easy question, join Jill Edward's comedy workshop course at Komedia – she has had such amazing success at getting people onto the national comedy circuit and TV. 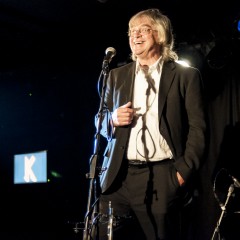 Voice talks to managing director and co-founder of Komedia