From Random Acts Midlands, Michael Baillon gives the audience his personal reflection on the story of a dragon named Rawry, through a short animation.

I had an interest in animation.

I had a dream about a lush desert and a forest with crystals towering over some canopies. I had this idea before my involvement with Random Acts.

I haven't thought of any yet and neither did I have the opportunity to work on another project.

The authenticity of my style of drawing as well as the opportunity to self express.

A lot of work on drawing the images as well as colouring some of them by hand while the other half was done on the computer.

It was great mainly due to it been thought out and the hardest part was not knowing if it would be good or not.

Yes because independent films have sometimes been given the cold shoulder because they were new and different and not thinking a certain way, which is not the case for the next generation of filmmakers.

Tell us more about Rawry - how did he come about?

He was a caiman-headed dragon with the horns of a gazelle with an oddball personality and a surreal sense of humour, alongside his willingness to get through certain obstacles.

Finally, what do you hope will come from people seeing this film? Do you hope more people will understand your perspective on the world?

Yes, because lots of people I know said they loved my short film and will also tell others that people with autism do have a wonderfully, brilliantly, sincerely great imagination. 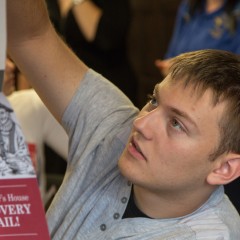 From Random Acts Midlands, Michael Baillon gives the audience his personal reflection on the story of a dragon named Rawry, through a short animation.