I attended Wallace Takeover day and spoke to Francesca, who took part in the evening Museum Takeover event at The Wallace Collection.

Francesca Vern is 17 years old and joined Wallace Youth when it first started a little over a year ago. "I have a massive interest in art and art history, which is what drew me to Wallace Youth."

How did your approach work helping with the planning and contribution to the project?

At the start-up of Wallace Youth, we couldn't organise much. So we spoke with the Wallace Collection about what we thought would be interesting, and what we thought they should put in their catalogue especially for teens.

We suggested photography courses, art history courses, those kind of things. And slowly, as we got to know the collection better, we did talks on our favourite objects. I spoke about these absolutely gorgeous Japanese cabinets. We met with some experts on the field who the Wallace knew, researched it ourselves and then wrote the talks and presented them to the public. Three of us are re-presenting them today, at the Takeover evening.

We organised the event today, where we chose what sort of station we wanted, what activities we wanted to happen. We chose the food, we chose the drinks, and we were given jobs to do tonight.

I'm on door, so when people come in, they've got to come by me and I'll sign them in.

So far it's a success: we've had 200 people sign up. When we advertised the event, people had to email or say they were going on the Facebook event, and they'd be put on the list so we'd know number-wise how many people were going to be coming.

"It was really engaging. I'm pleased for the opportunity to socialise in a museum. I hope there are more to come," an audience member told me.

Takeover Day was an accessible event for like-minded youth, allowing them to have conversations and discussions on the same interests in a relaxed atmosphere. They had freedom without constriction, and teens were free to interact and explore without being influenced by other age groups. Overall, a successful evening and all I heard was positive feedback. What made it fabulous was the interaction and independence seen between them all. 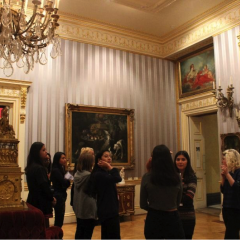 I attended Wallace Takeover day and spoke to Francesca, who took part in the evening Museum Takeover event at The Wallace Collection.