Prior to his 'Introduction to Theatre' workshop at the Young Vic Theatre, the esteemed The Curious Incident of the Dog in the Night-Time and The Threepenny Opera playwright spoke to Voice about his views on the next generation of playwrights.

Earlier this year, his Curious Incident was voted the joint best play of the last decade. Since it, he's enjoyed international playwright plaudits and is now one of the highest-profile playwrights in the country and an Associate at the Lyric Hammersmith.

How did you get into your job role in the arts?

"It's a funny question to ask somebody working as an artist because, for a lot of people working as artists, it's not like getting a job in many other industries. There's normally, for every artist I know of, a lengthy period where it's worth distinguishing. The word job is odd, that's the thing. The two words that people often use and it's worth distinguishing between are 'career' and 'work'. I think, like a lot of artists, we start the work years and years before we start the career. The work of writing anything of any form I've done since I was a kid, since I was very little. Since before I can remember, I've written for fun. It's been an activity that makes my place in the universe, where you feel less lonely and feel more excited and can exercise my imagination."

It's about putting the shift in. Reading plays. Watching plays. Studying plays and the decisions a play writer makes.

His time at the University of York introduced him to the theatre world.

"I started writing for theatre when I went to university. It was the first time I'd really been to see what might extensively become a serious play. When I went to university I did a History degree. I went to the Drama department of the university to watch the plays and the synthesis of volatility of life, performance, and the possibility of telling a story that was dramatic really excited me and I just started writing plays. I started writing a few at university, took those plays from university to the Edinburgh Fringe festival and produced them there. By then, I kind of got the illness that if you are working as an artist, the two things that I would say is, one, it's absolutely possible, it's really important that I went to a regular state school. It wasn't my choice as a kid, it wasn't something I felt entitled to or if I had some kind of insight into. It was just something I loved.

And the second thing I would say is what distinguishes me in terms of the difference between work and a career and all my peers I was at university with. When every intelligent voice was telling you to stop," he says, hammering home the importance of rebellion to creativity. "My parents were telling me to stop, my friends were telling me to stop, and my family, who were lovely, told me to get a real proper job. I just didn't f****** stop and just kept going."

"You know, after so many rejection letters, it took 7 years to get my first professionally produced play. It was called Bluebird at the Royal Court Arts festival. It was my first play but it wasn't my first play. It was the first play of my career but not my first play of my work. Whether or not it's my job or not, I mean it is in that I take it seriously as an act of work. I go to work in the morning and I do a shift. I'm from a Northern protestant family and the work ethic is really important and I take it seriously. It's not about lazing around and getting stoned and looking for inspiration and just kind of drawing it from the ether or from sh*t around a wire. It's about putting the shift in. Reading plays. Watching plays. Studying plays and the decisions a play writer makes. I started on the 1st of January 2000 and I was made Resident Dramatist of the Royal Court."

So, you've gone into the minds of a lot of teenagers and I was wondering what draws you into writing about teenagers and the youth in general?

They have as much intelligence as they're probably going to get when they're 25 but they're kind of in their 'amber' waiting to happen...

"I was a teenager and that was quite a defining experience. I've made two teenagers and watching them grow and develop and the thoughts I have on them and their potential possibility was constantly inspiring. I once worked as a school teacher in Dagenham in Essex and, at the time, I wasn't making money for my writing. The kids I worked with there, again became a constant inspiration and they kind of dipped my head in and broke my heart and filled me with possibility. And I always want to get into that experience.

I know that you're dramatic especially at being 17 years of age. A 17-year old is on the cusp of a life and their identity is defined. But also they have huge amounts of sense of self but actually legally they have few rights. They have as much intelligence as they're probably going to get when they're 25 but they're kind of in their 'amber' waiting to happen and this dramatic change too that I found fascinating."

"It's really interesting, there's culturally so much spoken about the young, which I know you don't define by the actions in the world in the last 15 years, are filtered with 17-year olds. You look at the boys coming over from Calais and the cultural horror because of them being 17. There's people being on the cusp and this has this cultural fascination. What I definitely know for sure is that you're teenage years are not those beauty years of your life, I know that's something you're told over and over again - the best years of your life. They're f****** not. They're sh*t. Compared to your twenties, no compared to your thirties. Your thirties are f****** great. The teen years are years of status and fear but for a dramatist they're compelling."

What kind of theatre do you think the next generation of playwrights will be producing?

"Wow that's a really exciting question. I have no answer to it, genuinely no answer and that's really thrilling. One of the best things about my work is meeting your writers and writers who are starting now. It's a disorientating and dislocating experience for me, to say I don't know, people who- how old are you?"

"When Bluebird was on. So literally all your life I've had work produced professionally. So increasingly significant theatre workers have had me as a presence in their theatre ecology all their life, which is really f****** weird, to be honest. The most thrilling thing for me is meeting people who are writing from that position and they're finding my work old fashioned and arcane, and they want new ways so there is a hunger and a restlessness. One of the great joys of theatre is that the age in theatre is not a hierarchy. It doesn't matter how old you are, your hierarchy isn't defined by your age. So somebody can come along like Alice Birch and Alice McDowell in the last three or four years who just redefine for me what a playwright can be. And I read their work in, not a patronising way, but like a thief. I just want to steal from them. So somewhere there will be a 17-year old who is about to write a play which will redefine the next 20 years and the thrilling thing is I don't know what that play is going to be like. I can't wait to find out."

What advice would you give to young people interesting into getting into your kind of work?

"Do the work. Start the work. Start writing. The one part of being an actor or a director is that you can't do it on your own. You can't act unless somebody has written a role or if you have written a role for yourself. You can't direct without a piece to direct. You can write a play and you can just keep writing. And read hungrily. If you want to be a playwright, read hungrily. Go to the theatre as much as you can. Every gig in London has nights when you can go very, very cheap. Find out what those nights are and go and see them. Go and watch those plays.

Watch and read not like a fan and not like an academic, but like a thief. You read with a sense of wanting to steal something. Every play you watch, think to yourself, "what do I want to nick from that". Don't think how much better you are. Cynicism is the easiest thing, the easiest position. You can watch a play and say it's sh*t. That's not good enough. Find out what was brilliant about it and steal to make yourself better. Never ever ever stop. The day after you decide to stop would be the day you had made it before you had decided to change to stop. If you want my advice, that's it."

To find out more about playwriting, visit Creative Choices, a website filled with careers advice on working in the arts. 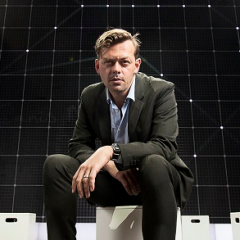 Prior to his 'Introduction to Theatre' workshop at the Young Vic Theatre, the esteemed The Curious Incident of the Dog in the Night-Time and The Threepenny Opera playwright spoke to Voice about his views on the next generation of playwrights.