Having been shortlisted from hundreds of applications, Nidhiya is one of the International Volunteers helping in the Digital arts and culture space at Mozfest 2016!

Can you firstly tell us a little bit about yourself?

I'm a recent graduate who is passionate in the field of innovation, entrepreneurship, programming, open source technologies, women empowerment etc. I have been active in tech and maker communities and ran my web service start-up while I was in college. Having completed Bachelors engineering degree in Information Technology, I got selected for Young India Fellowship which gave me the exposure to liberal studies and leadership. I have been contributing to Mozilla for about three years. I have been selected for Grace Hopper Scholarship 2014, RailsGirls Summer Of Code 2015, Kairos Fellowship 2015 and have won first prize in two international hackathons including Angel Hack 2014 and Geeks Without Bounds 2016.

How did you first hear about Mozilla?

I was familiar with brand name Mozilla as I have always been a regular Mozilla Firefox user. But I was not aware of the story of Firefox, I was not aware of thousands of amazing contributors all across the world trying to provide safe and better access to open web. When I got invited to the Mozilla Event, I said "YES" without giving a single thought. I spent the whole day researching about Mozilla communities across the world and decided to go to the Mozilla Kerala WoMoz Festivalin the year 2014 atIndira Gandhi Institute of Engineering & Technology [IIET] . Ever since that date I was an active Mozillian and I would proudly say "Once a Mozillian , Always a Mozillian."

What is a Mozilla Representative?

The Mozilla Reps program aims to empower and support volunteer Mozillians who want to become official representatives of Mozilla in their region/locale.

The program provides a simple framework and a specific set of tools to help Mozillians to organize and/or attend events, recruit and mentor new contributors, document and share activities, and support their local communities better. Being a Mozilla Rep I have been able to support our community by bringing in more contributors and propose more events.

This is your first time coming to Mozilla Festival. What made you decide to attend?

Mozfest is the global event that celebrates the diversified set of contributors all across the globe and to emphasise on "Doing good is part of our code". This is the first time that I have been invited to participate in MozFest and I consider it as an opportunity to be introduced to the global team.

What do you hope to get out of the weekend?

I look forward to learn from everyone and actively participate in MozFest by sharing my experience as well. MozFest will definitely able to charge me up to contribute more to society and also to pay it forward to magnify its effect.

What is your earliest art memory?

Being a daughter to an artist, my childhood was very much colourful. I remember messing around with little paint bottles and brushes. As I grow older, I started sketching and painting but have never been close to my dad's abilities. But I do appreciate art in all aspect and make sure to attend exhibitions and events

What is your earliest technology memory?

I used to tinker around with most of the electronic gadgets and it became an issue for my parents when I started dismantling them. I clearly remember keeping my secret tool box that is filled with lots of IC's capacitors, resistors, LED's and wires collected from various gadgets when I was very young. Later, it was this curiosity of electronic gadgets that made me a hobby hardware hacker.

Being interested in both art and technology, how do you think the two intersect, and what further integration can happen in the future?

The idea of integrating two different field is to bring in more diversified and innovative ways. The synergy between technology and art can provide creative solutions. Technologists can help artists to use technology to come up with brilliant works and vice versa. From a broader perspective field of HCI (Human Computer Interaction), AR (Augmented Reality and VR (Virtual Reality) can both be treated as technological art. I would also stress on the point that humans are born to enjoy and create artworks, now mankind is using tech to ease the same operations. With the advent of rapid prototyping and high quality digital fabrication methods, art has became serious subject of relevance to the tech savvy generation.

Where do you think the balance should be between art and technology in education?

If the education system is more receptive to the idea of mixing two different subjects as per the interest of students, can promise more innovations. The more relaxed the system is, the more the co-creation is. Defined boundaries restricts the imagination. The blending of art and tech with the help of the right resource persons can act as a catalyst to new ideas. Balance is a very relative term and in fact its absence won't kill innovation.

Why is open-source so important?

Open-source is an effective way to create collaborative and high quality software/ hardware project by crowdsourcing the contributions from people across the world. It's a social asset that motivates people for collaboration and sharing. In this era, the significance of open source is commendable, especially when considering the effect it has had on education, technology, business and development.

The technology industry in infamously male dominated. What has been your experience within the sphere?

When I used to be the only girl in hackathons, techie gatherings and conferences, the idea of alienation made me stronger. Being a person who is living in a rural area which won't allow girls to travel alone post 6pm, I have been the black sheep who don't follow any of these time restrictions - I used to stay back in college to access internet. Stereotypes and imposter syndrome was a mental block to me and it was the support from open source communities like Mozilla which helped me in overcoming the same. I owe most of my success to the tech and entrepreneurship communities I have been a part of.

How can we continue to make technology more accessible, and to use one of your quotes, reduce disparities in large communities?

We need to ensure a welcoming and gender neutral environment in any community spaces to bring in more resources and diverse talent. Technology is always accessible, but it's the perception of the user crowd that has to be changed. Disparities arise when we start focusing on the differences over similarities, if we were to be driven mainly by passion then disparities would never be an issue.

How has participation increased because of technology?

From the ages of Morse code to instant messaging, technology has always improved the methods of communication and access of the information. Communication and information sharing being two major elements for any active community, technology has catalysed the community participation to a great extent. The non-profit organizations like Mozilla have contributors from all across the world. That's the right example that is showing how technology served as a tool to increase participation.

What is one area of technology you are looking forward to seeing advance?

The Fourth Industrial Revolution is at our doorsteps. Internet Of Things, Artificial Intelligence and Machine Learning are already the talk of the town and I am of the opinion that connected devices and automation are going to change the world. It will make our life easier and more effective. It might take some time for the whole of the world to get adapted to new technologies, which is also a reality check for conventional systems to get ready for this change. 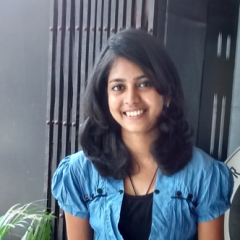 Having been shortlisted from hundreds of applications, Nidhiya is one of the International Volunteers helping in the Digital arts and culture space at Mozfest 2016!