Snow Queen actor and producer Arran Hawkins talks to us about Theatre Anon, working in the arts, and gives advice to those wanting to enter the industry

My name is Arran Hawkins and I run Theatre Anon, a Shanghai based western theatre company. We have brought The Snow Queen to the Fringe this summer, an adaptation of the classic Hans Christian Andersen story. We stay true to the original tale of a little girl searching for her best friend Kay who has been stolen by the story's titular figure. We bring the many characters to life with an ensemble cast, adding music and songs, vibrant costumes and fast paced scene changes.

We had a big bay window in the house I lived in growing up, with big velvet curtains that separated it from the rest of the room. I used to get my younger sisters to perform shows with me for our mum and dad, grandparents, neighbors, anyone who would pay attention, using the curtained off area as our stage. My mum, either out of enthusiasm or annoyance, persuaded the headmaster of my school to start an after-school drama club. I've been hooked ever since.

Harrison Ford, probably. Watching him run away from a giant boulder, swing across chasms with his whip, hold his breath on the top of a submarine for several days. I just wanted to be like Indy. And if that was an impossibility, then I wanted the next best thing, which was to pretend to be like Indy, or Han, or whoever. So, I became an actor.

By professional I assume you mean paid to perform. That would have been in the first "Professional" show the theatre company I worked with in Cornwall staged in 2005, although we had formed the company as teenagers and put on shows for many years before, doing it for the love of theatre. It was a show called Laughing Gas, by Nick Darke and Carl Grose, and it was the same company under a different name. We toured it for two summers and it was a huge success.

There are several. Getting paid to do something you love. The camaraderie of working with other professionals from different fields, especially in festival situations such as The Fringe. Everyone supporting each other and making future plans for collaborations. And the feeling you get from your audience when you have done something special, knowing that you have brightened their day in some small way.

The lack of security. Not knowing where the next job is coming from, or if there is a next one. And the erratic hours. You're either waiting around twiddling your thumbs, or you don't have time to stop and take a break. It's all or nothing.

Usually the audience will let you know. If their enthusiasm seems lacking and they leave in a hurry, its a safe bet that you didn't do a good enough job. At the same time, you can come offstage frustrated that it was a terrible performance, and yet the audience will tell you it was great. From my perspective, even if a show goes really well, there is always room for improvement.

Far too many to mention. But here's a few. In film, Hitchcock, Kubrick, The Cohen Brothers. In theatre, Pinter, Coward, Kneehigh. I would love to do a two man show with Eddie Izzard. I think that would be fun. Unlikely, but fun.

I brought a show here two years ago, Black Is The Color Of My Voice, which I directed and which was a huge success, mainly due to the talents of the producer/writer/performer Apphia Campbell. Once Edinburgh gets you in its grip, its hard not to want to come back every year. I was just waiting for the right show to bring, and The Snow Queen was something my art director Natasha Portwood and I had wanted to bring here for some time. This year everything just fell into place to make it happen.

Is performing at EdFringe different from ¡®traditional¡¯ shows?

Very. The lack of tech time in the space and the quick changeover between shows leaves you little time to think, so you have to be at the top of your game to pull it off well. You're also competing with 3000 other shows, some of which are outstanding. In Shanghai western theatre is limited, so you can guarantee an audience. Here, promoting your show is half the battle.

Start earlier. I left it awhile to really focus my mind into doing what I am now doing, whether through a lack of self belief or sheer idleness I'm not sure. A bit of both. But I would like to slap the old me into getting going a lot sooner.

Don't quit. If it's what you want to do, don't ever let anyone put you off doing it. I meet many people my age who say, "I wanted to be an actor once, but my parents/friends/psychiatrist told me I should get a real job". It's your life, not theirs. Do what you love. If you fail, do it again and fail better. If you get a bad review, use it as the driving force to prove them wrong next time.

I am a bit rubbish when it comes to social media. But we do have a Facebook page, Theatre Anon. And you can email [email protected] to join our mailing list.

We are on at 1pm at Gilded Balloon @ The Museum, in the Auditorium, for the whole of August. The show is The Snow Queen, it's child and adult friendly, and you will have a great time. 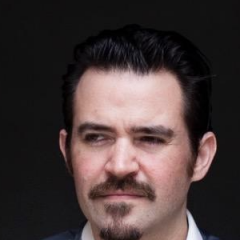 Snow Queen actor and producer Arran Hawkins talks to us about Theatre Anon, working in the arts, and gives advice to those wanting to enter the industry