In the run up to Voice's latest coverage of the Edinburgh Festival Fringe, we have dozens of interviews with performers like Ruaraidh Murray, who we'll be seeing up there.

My name's Ruaraidh Murray. I'm an Edinburgh-born actor and writer. My new play is a dark comedy called The Club. Think Phoenix Nights meets the Sopranos. It's set on one night in London's Legendary 90s club, The Tardis. If you were there you wouldn't remember anyway…

My earliest arts memory was when I acted in a three-part TV series called Brond when I was a boy in 1987. My character was pushed off the Gibson Street bridge in Glasgow by the actor Stratford Johns in front of a young John Hannah. I loved it! That's when I got the bug for acting.

The best thing about my job is that I come up with an idea, write it and I see it through to it being performed where the audience hopefully laugh and maybe have a wee cry.

The worst thing about my job is…I've still not had the time to watch the new Star Wars movie.

You always know if you've had a great show. It's like having great sex. Bad show…very bad sex.

My next project is a feature film called No Trees On Tiree which I'm working on with the NYC comedian Lucie Pohl. I can't wait!

I wanted to come to Edinburgh Festival to perform my dark comedy show The Club as I want to turn it into a sit-com for TV. I'm hoping the right industry peeps come and see it.

Performing at Edinburgh is different from traditional shows as anything can fucking happen!

If I could travel back in time and give 16 year-old me one piece of advice it would be…girls love cheesecake.

I would advise young people who want to enter the industry to: 1. Work your 'balls off' 2. Come and see my new dark comedy The Club at 5pm at the Gilded Balloon this Edfringe 2016!

I can be followed @ruaraidhmurray1 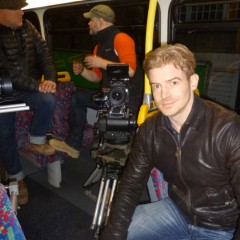 In the run up to Voice's latest coverage of the Edinburgh Festival Fringe, we have dozens of interviews with performers like Ruaraidh Murray, who we'll be seeing up there.