In the run up to Voice's latest coverage of the Edinburgh Festival Fringe, we have dozens of interviews with performers like the award winning writer, actress and comedian Juliette Burton, who we'll be seeing up there.

Hello! I'm Juliette Burton – a comedy type person thing. I have just returned from touring Australia and New Zealand with my previous show which sold out at Edinburgh Fringe last year and this year I'm bringing a brand new show called 'Decision Time' to Edinburgh – it's a totally true comedy that asks the question "Can one choice change a life?" I have a big decision in my life right now and I'm terrible at making decisions so I've written a comedy show to help me make my decision! This is my 3rd solo show, 5th year performing my own shows at the Fringe and my 11th year since I first visited the festival.

Performing as The Star of Bethlehem in my school nativity play. I had a solo song and everything. I still remember the words… come find me after seeing my show this Fringe and ask me to sing it to you. I promise I will!

I always wanted to be a performer, but kept getting encouraged away from it by lots of people. It became clearer as I grew older that to not perform was like not breathing for me. It is something I cannot not do to use a grammatically incorrect sentence.

I remember my first Edinburgh Fringe performing a show I'd co-written – it went charmingly haphazardly! By the end of that Fringe we were packing 100 people into a 60 seater venue…not that I can do that this year because health and safety!

It isn't a job. That's the best thing. It makes me feel alive.

I prefer to focus on the positives – gratitude can see me through when things get tough.

It's the audience that decides that. If I have had fun and feel like the audience has too then that's all that matters.

Jim Henson. Or Stephen Fry. Or Dawn French. Or Shakespeare. Or Gonzo.

I first came in 2005 as a reviewer for my local paper. I returned as an actor in other people's plays a few years in a row, then in 2011 as one half of Mace and Burton. My first solo show was at the Gilded Balloon in 2013, my second in 2014, an updated version of that show returned and sold out every day in 2015 and this is my 3rd solo show, 11 years after I first came to the Fringe. Edinburgh feels like home, so much so that I moved there in 2012 and loved living there. I miss it every day so the other main reason to do Edinburgh Festival Fringe, beyond the showcasing new work and reaching new audiences is because I adore my adopted home-city.

Define 'traditional'! I'm not sure any show I've done is traditional. A fringe festival is different in that you get true fringe fans who are some of the most fabulous audiences you'll ever get. But then every show is a surprise, unexpected and delightful in its own way. The experience of performing at Edinburgh Fringe is certainly unlike anywhere else – even the Adelaide Fringe which is the second biggest arts festival in the world is far less busy with shows only on in the evening, not throughout the day like in Edinburgh. Edinburgh is a frantic, busy, proactive, positive whirlwind of opportunity – to meet new people, connect with new audiences and have a blast!

Aged 16 I was very unwell, already out of school due to mental health conditions, in and out of hospital and struggling to do life. I'd tell that girl that it will change. Hurry up and get to Edinburgh Fringe where your life will truly begin!

Also, be nice. To everyone, no matter what their role – everybody in every role is important and vital to making the arts industry what it is.

I'd love for your readers to come see my show – Juliette Burton: Decision Time is at the Gilded Balloon at 4.30pm from 3 to 28 August (not 15th). Come up for a hug after the show too! 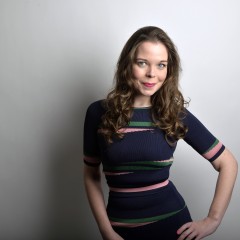 In the run up to Voice's latest coverage of the Edinburgh Festival Fringe, we have dozens of interviews with performers like the award winning writer, actress and comedian Juliette Burton, who we'll be seeing up there.