"When you fall in love with making art, as I did, as a kid, you’re not thinking of being motivated to get into an industry. You just want to tell stories and entertain and make people feel stuff and change the bloody world. Lofty ideals that crash and burn but that I cling to nevertheless."

I’m Daniel Hoffmann-Gill, made in Nottingham, I’ve been an actor and writer for 25 years now. Which is 25 years beyond my wildest dreams.

A one human tour-de-force theatrical extravaganza, that’s part tribute, part stand-up and fundamentally, a right laugh; even though it’s riddled with death and disease. A chance to have a good cry and also a good chuckle. Win-win.

Well, this is not my first time at the rodeo, sixth time to be precise. I’m not sure it’s a matter of want anymore, I’m not auditioning, and it’s a matter of doing. It’s a showcase for some of the best and worst art you could ever imagine. Naturally, I classify my work nearer the former.

Size. Scale. The merciless corporatisation that has engulfed it; which to be honest has engulfed the entirety of western civilisation, monetising existence into the oblivion of late stage capitalism. And to be truthful, I’ve never been to any other festivals.

When you fall in love with making art, as I did, as a kid, you’re not thinking of being motivated to get into an industry. You just want to tell stories and entertain and make people feel stuff and change the bloody world. Lofty ideals that crash and burn but that I cling to nevertheless. As for inspirations, Miss Lewis, my drama teacher at comprehensive school. She made me believe that a scruff like me to do a job like this and the fundamentals of acting she taught me, are still the backbone of what I do today. She is a legend.

Don’t hold back with the massive questions that in reality would take seven sides of A4 to answer will you? Bloody hell. Where to start with answering that? The first impact it had, was that an artistic career wasn’t for someone like me and that something called an artistic career didn’t even exist. Stuff of fantasy. Constantly being told, Miss Lewis aside, that an artistic career wasn’t an option. Then when I saw that it was, I realised that a lot of the people in the arts were from a very, very different background to mine. Which made me defensive and chippy. That’s how it started anyhow. Where it went is another nine paragraphs.

My dad’s mate drew an incredible picture of a Roman centurion nailing a cross into the hand of Christ using only 3 different coloured biros and it blew me away. It also terrified me. That’s around when I was 4, I think.

No and no. I missed making live work long before the virus came along so I’m just buzzing to be out there, with an audience again, telling stories and getting involved in that magical feedback loop that only live theatre can provide.

I’m glad you put cancel culture in quote marks because it really doesn’t exist. People just need to be kind to each other and keep an eye out for the dismal resurrection of fascism, with its divide and conquer gimmick.

My German isn’t up to snuff but I’d love to have tried to create a play or something, with Friedrich Nietzsche. What a mercurial human. What a genius. An erratic, kaleidoscopic thinker. I’m guessing hanging out with him would be like bottling lighting but would’ve been great to collaborate with the cultural critic extraordinaire.

Investigate ways of not being indebted and bringing your work here. I know we live in a debt culture but do you really want to be saddled with that for doing a version of 4.48 Psychosis? Do you really want to come? Is what you’re bringing really worth seeing? Remember you can get bad reviews but still sell, your work can be awesome but no one will ever know and you can be garbage but lauded. 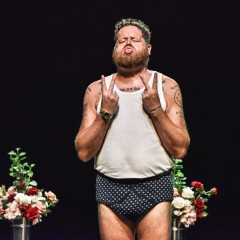 "When you fall in love with making art, as I did, as a kid, you’re not thinking of being motivated to get into an industry. You just want to tell stories and entertain and make people feel stuff and change the bloody world. Lofty ideals that crash and burn but that I cling to nevertheless."