"I specialise in object manipulation, flexibility and awkward comedy, and I regularly namedrop that I’ve worked for Cirque du Soleil because I feel that it adds legitimacy to my skills."

Hello reader, my name is Thomas but my stage name is Melon the Human. I specialise in object manipulation, flexibility and awkward comedy, and I regularly namedrop that I’ve worked for Cirque du Soleil because I feel that it adds legitimacy to my skills.

I would describe Assume People Like You (or APLY) as a circus/comedy hybrid with a wholesome angle. The show is trying to represent that feeling when you go to a party and you don’t know anyone so you kind of put on a character as you start to panic. Most of the skills in the show are rarely performed because that’s how I’ve tried to set myself apart from others. So in APLY you will see cube and broom manipulation, a bit of robot contortion, and I try to sell Ice cream mid show.

It is the biggest arts festival in the world! Like a lot of performers around the world, I want to expose myself to a wider audience than my quaint Australia home. I performed APLY to great success earlier this year and now I’d like to see if it can attract attention from global audiences and producers.

It’s size, which brings so many other benefits like more audiences, more producers, more friends. Sure it costs a fortune upfront, but surely everything will work out.?

My first career was as a high school teacher, and after teaching for a few years I had my quarter life crisis and decided to pursue performance. Acting was too hard, so I decided to move to China and pursue circus. I figured that if I got really good at a skill, there would be no doubting my ability, compared to how acting is quite subjective.

My background and upbringing was plain and didn’t affect my artistic expression at all! When it came to performance, I was the confident teen who could stand up in the front of a room and present a script. Unfortunately I learnt quickly that that doesn’t get an actor very far.

Fast forward to the quarter life crisis! I met the aforementioned Mario Queen of the Circus, who imparted some of his worldly knowledge. He encouraged me to try street performing, because if you can keep an audience's attention on the streets, you’ll keep it in a theatre. He also encouraged me to make a show that I would enjoy performing, because that way if the audience isn’t enjoying themselves, at least I am.

So now I’m bringing to Edinburgh a show that I think is funny, has awesome music and has unique, high level skills.

In grade 2, 7-years-old, we had to make a storybook. Since I had told everyone that I wanted to be a bookmaker, I was ready to go above and beyond. I got upset when the teacher told me that it could only be three pages long because I had already cut the first page into jail cell bars for that additional visual effect. Since the second page was an illustration extending from page one, I only had the back of page two and page three to write my story, which wasn’t enough. I forgave the teacher though, she gave me 50c to attend an author meet-n-greet at the school.

High school teaching. Sure it’s getting harder, expectations are getting heavier, the pay’s not great, parents are getting worst, students are getting ruder and it’ll probably bring on a third life crisis… but at the last school I was at, some students bought me a mug with their faces on it, which is kind of sweet.

Pre Covid: I was working for Cirque du Soleil and my solo show was a side project where I had a lot of fun. Post Covid: I am a high school teacher and my solo show is an attempt to make performing my full time job again so there needs to be accountability. My precovid approach was to make something and do it on stage. I had a lot of fun but it didn't come across very "professional," and most of the time, the audience didn't know what was happening. I've still tried to keep my uniqueness, but my post covid approach is to make it more accessible and less random-for-the-sake-of-being-random.

These questions terrify me. My show is about panicking at a party because I don’t know anyone. Asking a question that could invoke controversy brings out even more anxiety.

Nathan Fielder. If you know who this is, you will like my show. His TV show opened my eyes to embracing awkwardness as a legitimate comedy style, and not a goofy addition. I’m not sure how to take his true genius and apply it to a circus show, so maybe he’s reading this and interested. He has a new show out on HBO called “The Rehearsal.”

Now that I’m concerned that people have read “awkward comedy” and may be judging my show, here is a nice quote that validates me: “There are also two very different kinds of awkward. Those that are unintentionally awkward (picture an amateur comedian), which is simply cringey, and those that are intentionally awkward, which, assuming they have the skills to pull it off, can be very hilarious. Thankfully, Melon was definitely a good enough performer to pull off the intentional awkwardness.” – Regan Baker, TheatreHaus.com

Ask someone with more experience than me. I am happy to give advice regarding object manipulation or making a show that people enjoy, but I can’t really give advice on this show yet. I’ve teamed up with Cluster Arts for this venture because I have no idea what I’m doing, so if anyone would like to give me advice on taking a show up to the fringe, please reach out.

Seriously though, if you need advice on the arts and you think I have the expertise to answer, feel free to reach out. I remember how hard it was getting started.

It’s showing at Assembly Roxy at 230pm everyday of the fringe. I have a few Mondays off so if you really need to check, please go here - https://assemblyfestival.com/whats-on/assume-people-like-you

See Melon The Human: Assume People Like You at Assembly during the Edinburgh Festival Fringe from 3-28 August. For more information and tickets visit www.edfringe.com or www.assemblyfestival.com 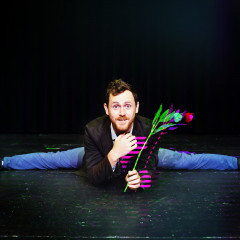 Interview with Melon the Human

"I specialise in object manipulation, flexibility and awkward comedy, and I regularly namedrop that I’ve worked for Cirque du Soleil because I feel that it adds legitimacy to my skills."