"I used my savings to book two weeks of clown school. It was two of the best and hardest challenges of my life. You go on stage and perform these ridiculous tasks and he’ll tell you “what you did was detestable.” It was hilarious and freeing."

No More Mr Nice Chelsea is an hour of comedy about what it means to be nice, where we learn it and when it’s time to stop. I ask ‘do we need to be nice to be loved?’ as I try to be actively hostile to the audience but keep apologising. It’s an hour of personal, playful and thoughtful stand up that takes us through 00s pop culture, existentialism and therapy. And it’s full of the best jokes I’ve ever written.

The Edinburgh Festival Fringe is the comedy fun fair. I wanted to wait til I had a show that’s really funny and expresses something people connect with. I can’t wait to share it with you.

It’s the biggest, it’s in the most beautiful city in the UK (Milton Keynes aside) and it’s round-the-clock performances of the most creative, beautiful and hilarious shows you’ll find. Plus you can buy beautiful, ridiculous vintage outfits from Armstrong's.

I thought I wanted to work for the charity that was doing the most good, in a role where I could too. But I got there and not everything is as it seems and I was missing fun and expression and playing. So I found comedy. My inspirations were teen girl magazines, Simon Amstell, sincere women singing and Mr Blobby.

I’m from everyone’s fave comedy punchline Milton Keynes (also shout out Slough and Swindon). And I went to a kinda rough school, it was a state comprehensive. But I don’t think it was fully comp, more like third-party fire & theft. Then, I was the first person in my family to go to university, and that’s where my friends introduced me to vegetables I had never heard of like courgettes, holidays that aren't packaged and stand-up and festivals etc. Though in the end, I had to sell my Latitude ticket to work at Sports Direct and cover rent.

These days I feel quite culturally rich. Although the bank won't accept that against your overdraft. It’s a weird one because often reviews call me like classic middle-class but I feel split between worlds now, not quite a part of either. Yes, I joke about philosophy and live in Oxford, but I learned my accent from Hermione and celebrated every childhood birthday getting all dressed up, going to the harvester and getting the big plate all you can eat (surely the plate size makes no difference).

I submitted a drawing (masterpiece) of one of The Angry Beaver to Nickelodean but it neither made it air nor came back to me and I think about it a couple of times a year.

I truly feel I’d be excellent at racing cars based on no evidence but I also really know it’s the case.

When I thought the 2021 fringe wasn’t going ahead I used my savings to book two weeks of clown school. It was two of the best and hardest challenges of my life. You go on stage and perform these ridiculous tasks and he’ll tell you “what you did was detestable.” It was hilarious and freeing. For a while after I felt a little fearless taking to the stage. This show is absolutely stand up and not clown, but my approach since learning just a little is to be a bit looser, and more playful.

One must imagine Sisyphus happy.

I don’t think anything should be exempt from examination. But I’m sceptical of cancel culture: whether it exists and whether it does any good. My Mum teaches in a young offenders prison, she’s shared a lot with me about the power of rehabilitation.

Make the show you want to see. 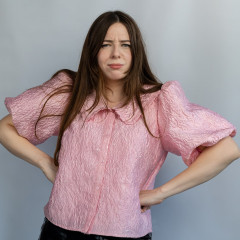 "I used my savings to book two weeks of clown school. It was two of the best and hardest challenges of my life. You go on stage and perform these ridiculous tasks and he’ll tell you “what you did was detestable.” It was hilarious and freeing."