"I was always told I was funny but had no idea it could be a career. The idea of making a living off of jokes was very intriguing to me."

My show takes something that's a bit of a bummer - infertility - and makes it funny.

It has been on my list of things I want to accomplish for a while, and I finally had a show to do it with!

I was always told I was funny but had no idea it could be a career. The idea of making a living off of jokes was very intriguing to me.

I mean, without any of that, I would have nothing to write about!

My grandma's house and the smell of leather and cigarettes.

I would love to work in theatre casting, so if I wasn't a comic, I would try that.

YES! I don't care as much about doing well as I did pre-covid. I lived and died with each set, and now I realise it just doesn't matter that much, and it's supposed to be fun. And if it isn't fun, then it's time to move on.

Joking about not being pregnant.

I think people need to chill out a bit. Jokes are jokes. People now feel the need to fact-check jokes because they don't realise that sometimes jokes are just made up, and we use words and phrases that make thoughts funnier and not necessarily because it's a true historical statement. Those people are sad, really.

Ha! I've already been screwed over a few times, and the shows haven't even started. So ask me at the end.

Inconceivable will be at 5:05 pm at Just The Tonic at The Mash House.

Inconceivable will be at 5:05 pm at Just The Tonic at The Mash House. For tickets and more information, visit https://www.edfringe.com 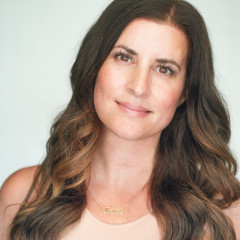 "I was always told I was funny but had no idea it could be a career. The idea of making a living off of jokes was very intriguing to me."