"There’s a lot of pressure to do well and it’s not always that nice being reviewed and judged constantly. However the flip side of that is when it’s going well and when the audiences are lovely it really is a lot of fun."

Hello! Yes I can. My name is Jake Lambert and I am a comedian. Like that? I could give more, like I have a cat, his name is Richard Parker, my favourite colour is green and my lucky number is 28. If that’s the sort of thing you’re after.

It’s a story of me trying to find a friend I hadn’t spoken to in 10 years who never had social media and whose last name I couldn’t remember. Which made it quite difficult in 2020 when it was illegal to leave my house. Of course a story about me googling someone would be quite a boring hour so it’s more about the story of how I became friends with her, and how I discovered I have epilepsy. (The two are connected). Oh also, can’t stress this enough, there’s jokes, lots of jokes.

I usually ask myself this a lot in the week running up to the festival and then a few times a day whilst I’m up there. There’s a lot of pressure to do well and it’s not always that nice being reviewed and judged constantly. However the flip side of that is when it’s going well and when the audiences are lovely it really is a lot of fun. But then you do also get the rainy Tuesday shows where a soaking drenched audience are sat watching because you were the alternative to being stood in the rain for an hour.

Oh this could be such a long, and endless answer which I hope in itself sort of answers the question. There’s nothing else like it at all. Not one festival where the whole city becomes a giant arts and comedy festival.

I always wanted to do it. Most comedians I think will have a moment where they realise it’s all the wanted to do and their life was just constant clues. For example I wanted to write, direct and act in comedy shows, then one day realised that if I stood on a stage in a comedy club I could perform what I’d written and direct myself. It was a much cheaper option - even when you consider the fact I’m paying over £2000 for my accommodation.

The first comedian I ever saw was Harry Hill. And wanted to be like him. I’m nothing like him although we do live on the same street so that’s similar I guess.

A lot of comedians went to elite schools that gave them opportunities to perform, and/or had parents in the arts, and a life full of culture. I grew up in Slough. My secondary school didn’t have a drama department until I got to year 10 and I had no idea what the Edinburgh Festival was until I started comedy. Maybe this blind ignorance helped me in some way? Maybe.

I remember doing a play in year 2 and my teacher laughing at what I was doing on stage and her saying to me that she finally understood who I was. Quite a big statement to make to an 8 year old. As I said the clues are always there it just takes comedians a while to realise we’re supposed to be comedians.

Annoying everybody in the workplace. I wanted to be a police officer ever since I was in year 4. Despite what Miss Booth had said to me two years earlier. So almost definitely that.

Oh yes definitely. I think just having so much time to take a step back and assess what I was doing was a positive. I think I was just going through the motions and trying to write jokes then putting them together to make an hour each year. This time I’ve been able to write to a topic to actually create a show.

Oh god please don’t drag me into this. Obviously if the art is showing something highly questionable, or is actually illegal then it should definitely  be cancelled (but maybe that’s just my police officer side coming through)

Tom Hanks. I don’t think there’s anyone else whose career I’d want. Also I once had a dream that I met him outside Slough bus station and he was really nice.

Please don’t do one about epilepsy. I don’t need the competition. Thanks.

By searching ‘Jake Lambert’ in the search bar on their social media platform of choice or google. I’m sure that’s easier than giving people the @ handle isn’t it? If not then that’s @littlelostlad on most things but I think the search bar is better.

Jake Lambert: Liminal is performing at Pleasance Courtyard at 7:05pm every day from the 3rd-28th august (except the 15th). For tickets and more information visit edfringe.com 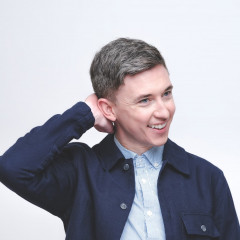 "There’s a lot of pressure to do well and it’s not always that nice being reviewed and judged constantly. However the flip side of that is when it’s going well and when the audiences are lovely it really is a lot of fun."