"Despite the obvious and numerous horrors of the pandemic, I have found one singular positive from it all. And that is to get on and do it. Since the start of 2020 I have written more, and more frequently... We found other ways to make art, which makes the industry less exclusive"

How would you describe your show?x

The company has three shows on, throughout the day, almost every day, at different venues across the city. It’s so exciting to be part of a rep company: playing a cheeky anamorphic school-kid in the morning, and a football-playing, foul-mouthed mill-worker in the afternoon. Rep companies offer a great challenge for the actor, but also a real thrill for the audience who get to watch all the shows.

The Giant Killers is something very close to my heart. Long Lane Theatre Company first took it to Edinburgh in 2017 and it was a big hit. Returning in 2022 it feels more pertinent now. A historical play, it’s based on stunning real events that happened in 1879. A group of mill workers in Lancashire – a few miles from where I grew up – were the first working-class football team to partake in the F.A Cup, their opposition made up of so-called gentlemen from, amongst others, Eton. It’s a play that speaks to contemporary issues: sports stars as idols, classism, worker’s rights, the right to strike and the need for community and togetherness. Performing this play in a summer that sees various industries using their right to strike, in a country still led by the affluent and privately-educated, feels fateful. It’s only a shame, in many ways, that a play set one hundred and fifty years ago is still so apposite. Eve and Andrew, the writers, have managed that really clever thing of crafting a script that is about football, politics and history whilst ensuring that the audience doesn’t need to know anything about football, politics and history to enjoy it.

I have been lucky enough to have performed at the National Theatre, in the West End and at Shakespeare’s Globe, among a few other large spaces. Each of these theatres is special and, of course, there is something wonderful about knowing your story can reach thousands of people over several months. But, having grown up watching Festival highlights on the tele, there always appeared to be a unique significance to Edinburgh: a chance to be in an environment with hundreds of like-minded artists, all striving to tell stories that might not be told elsewhere, for a short and intense period of time. It feels like the purest place to be: an environment that harks back to why any of us fell in love with theatre in the first place, sharing stories in intimate spaces.

I think Edinburgh is seen as the benchmark of indie theatre. It really is a safe space for artists of every stripe to experiment, explore, play. No one is thinking of huge commercial revenue (apart from landlords) so it becomes purely about the love of art. The festival’s legacy of uncovering – or at least highlighting – great artists is second-to-none.

Growing up in a post-industrial, working-class Lancashire town, I had little access to theatre. It seemed like a distant, rich-person thing and I felt like the gatekeepers ensured it stayed that way. But my family – despite not having a load of money, despite not having an abundance of cultural institutions nearby – strived to create an artistic environment. My mum was, and is, a voracious reader. My dad was a huge music fan (he sold his drumkit to pay for a deposit on their first flat: how times have changed) and me and my brothers, from a young age, would write stories, perform plays in the yard, forcing family members to watch. Somehow, despite the lack of theatre around us, we all entered the arts in some capacity. Ultimately, I think it was borne out of a desire to not get stuck. My dad died when I was twelve and, though he had a happy enough life, he had found himself in a job he didn’t love, slightly frustrated. I suppose that lesson – do what you love, love what you do – became ingrained in us all.

My hometown will always be in my heart but when I was growing up there, it had fallen a long way from its mid-19th century status as an important industrial centre. Once the mills closed, no other industry ever replaced them, so the buildings crumbled and the shops got boarded up. The one business that thrived there was the maggot factory that stood on top of the moors, the stench stealing down into the town. That was a frustrating place to grow up but it instilled in me a desire to break out, to discover the other, and to tell stories. It’s the sort of town where we were told that we couldn’t be in the arts, that it wasn’t for us, that we should leave that to the posh kids. The voices of the less-affluent, of the working-classes are still struggling to be heard in the arts (whatever P.R they do to tell us otherwise) and that needs to change, otherwise we’re faced with an industry filled only with those who can financially afford to take risks. Filled with nepotism. Filled with old, middle-class dudes patting themselves on the back.

Books! Endless books, being read to at night, choosing several from the local library every couple of weeks, trying to write my own. ‘Choose Your Own Adventure’ stories were a particular favourite. My brother Dominic is now an author, I write plays and Matthew, my eldest brother, is a writer and director for screen, so clearly the love of the written word infected us all.

In my fantasies, and in no particular order: whiny singer-songwriter who writes songs about loss; footballer; investigative journalist in 1970’s New York; leader of the Labour Party.

Despite the obvious and numerous horrors of the pandemic, I have found one singular positive from it all. And that is to get on and do it. Since the start of 2020 I have written more, and more frequently, than I did before. We found other ways to make art, which makes the industry less exclusive. In the first lockdown, I wrote a short film, had two actors who were living together self-shoot (which I would then watch, note, and ask them to shoot again), and edit the piece from the comfort of my flat. There was a sort of liberation that happened around the pandemic, as if someone had said, “the normal means of making stuff have gone for now, so just create any way you can”. I wrote more songs, more quickly, and about up-to-date events, than previously. Filmed them, stuck them up on social media and just did it. I guess for many working-class artists one of the biggest barriers to creating is finding time to create when you’re working several jobs: behind the bar, in the school, whatever it may be. The last couple of years have spoken to me a lot about time: about finding time to make things. And that time is short. If you’ve got the ideas, get them out, any way you can.

I don’t know what cancel culture is, really. It’s a nifty phrase that, like so many other cherry-picked soundbites, is thrown around with such frequency that it is now senseless. I do believe that one should be responsible for one’s own actions and words, regardless of it being art. However, we used to have these things called nuance and context, which were really useful when it came to debating thorny issues, but they’re from the olden days and most people don’t know what they are anymore.

No specific names but I’d happily work in the offices of the critics, literary agents and producers who scorned the likes of Sarah Kane, Samuel Beckett, Ionescu, just to have a bit of a giggle to myself. I think it is those artists – the ground-breakers, the pioneers – that provide the most inspiration, whether we acknowledge them directly or not.

Alternatively, I wrote into ITV when I was 8, suggesting they did a children’s version of Gladiators. They wrote back saying no, that it was a silly idea. And then, of course, made a children’s version six months later. My resentment has settled somewhat, and I’d still like to work on Gladiators, specifically with Wolf.

Get a show that you really love. Whether you’re performing in it, producing it or writing it. Make sure you really love it. From the finance to the venues to the dull logistics of travel and accommodation – let alone the pretty hardcore schedule when you’re up there – it’s a stressful thing to go through. If your heart isn’t in it, if you aren’t fully invested in the source material then you might end up wondering – sometime into week two – why you went through all this.

The Giant Killers is on at the Gilded Balloon Teviot almost every day of the festival, at 12.45. Sort of the perfect time for that show: your brain is engaged and you’re ready to be moved and motivated, and our show will give you the confidence to head out into the world (or the streets of Edinburgh) with renewed vigour.

@LongLaneTheatre on Twitter for all the details on The Giant Killers, as well as our other two shows.

@GrayMButler for some nonsense and angry comments about inept politicians screwing the poor. 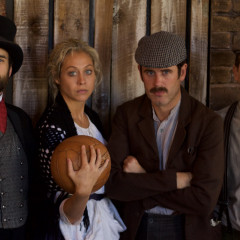 "Despite the obvious and numerous horrors of the pandemic, I have found one singular positive from it all. And that is to get on and do it. Since the start of 2020 I have written more, and more frequently... We found other ways to make art, which makes the industry less exclusive"