"There’s been a three-year creative backlog within my loins which I can’t wait to release. That sounds more sinister than enticing, doesn’t it?"

Hello! My name is Harriet Dyer (middle name Louise, but I don’t put that do I?), and I’m a comedian, writer and mental health advocate. I’m originally from Cornwall but now based near Manchester.

My show is about something quite harrowing that happened to me throughout a lot of my life. It’s proper bearing all, no doubt quite shocking at times but very hilarious, I believe. I think I’m safe in saying you’ll hear nowt else like it up there!

There’s been a three-year creative backlog within my loins which I can’t wait to release. That sounds more sinister than enticing, doesn’t it? I’ve come up with a very good show that you get to do for the best part of a month is very exciting for me. Also, since I was last there in 2019, four feral children have entered my life (long story), so it’d be splendid to have a break from them.

The length, the buzz, the ridiculous cost, and the fact that it’s in such a beautiful city!

I always used to be quite a wayward soul, and the only thing that ever even remotely settled me was performing. No matter what was happening in my life, I always still had the want to succeed in that. Comedy-wise, no one made me laugh like my mum; she was so silly yet dry, cutting and smart with it too! One thing I remember us looking forward to watching together and being in total hysterics at was The Dinner Ladies with Victoria Wood and Julie Walters.

You are what you know. I was always what people would describe as ‘a character’ and ‘eccentric’. Still, instead of stifling that and wanting me to focus on more traditional subjects at school to get ‘a proper job’ one day, my parents ALWAYS encouraged it. I have fond memories of my dad taking me to the ballet (sounds posh, but we pilgrimaged from Cornwall to Devon on the coach as we didn’t have a car). Years later, when a theatre opened where we lived, my dad got a job there, so then we’d always go and watch stuff there. So yes, performing was always something we watched, and I was encouraged to do at school and out of school theatre groups etc., from a young age.

Probably my dad taking me to the ballet (not sure, but I think I was about 5)? I remember being so happy and in awe of it all, although I didn't have a clue what was happening! I remember giggling at those little glasses under the seat, and the experience as a whole made me feel like I was someone special.

This is going to sound very dramatic, but I genuinely don’t think I’d still be alive. At times it has been the only thing to give me purpose, and the first thing I’ve been addicted to that hasn’t been very bad for me.

I learned to be more adaptable, which is no mean feat from someone strongly opposed to ‘change’. I also take less for granted and am more appreciative. I guess it’s why I’m especially looking forward to the fringe this year - just really looking forward to performing every day. Gosh, that sounds wanky doesn’t it, am I allowed to say wanky in this?

That question comes from nowhere, doesn’t it??!

Cancel culture is dangerous because things need to be investigated, so it’s not fair if people have already ‘been cancelled’ before that’s been able to happen. But, having said that, people should definitely be held accountable for the shit they do.

Does it have to be someone from proper history times? I really like Kathy Burke, but she’s very much alive, not from history. Anyway, she’s a legend. Failing that - Queen Boudicea or Anne Lister.

Give your money to me instead and let’s go on holiday!

If you want to do it, work hard on getting it the best it can be, then take it up. But there’s always a lot of beige, so make sure what you want to do in some way stands out from that.

You can watch Harriet's show at the Gilded Balloon (Snug) at 4:20 pm throughout August. For more information, visit https://www.edfringe.com/ 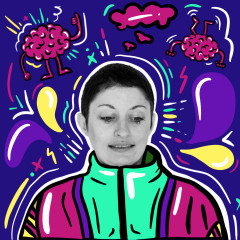 "There’s been a three-year creative backlog within my loins which I can’t wait to release. That sounds more sinister than enticing, doesn’t it?"