"Being a part of a festival that is so sprawling and has such variety is an inspiring thing. Also, the ups and downs of it forge a bond with your fellow performers like no other."

I’m Gecko - a singer-storyteller based in London. I write songs that are a bit funny and sometimes a bit emotional.

It’s an hour of story songs on a range of topics, from pig outlaws to the ignored painting opposite the Mona Lisa via tooth fairy admin.

It’s like being on tour but with less travel between shows.

Being a part of a festival that is so sprawling and has such variety is an inspiring thing. Also, the ups and downs of it forge a bond with your fellow performers like no other. Plus, it’s a lot more based in Edinburgh than most other festivals I’ve been to.

As a kid, I really wanted to make films - but logistically, that was a hard thing to carry out when your resources are mostly cardboard boxes. Making songs was a way to create worlds in my head and the heads of the audience (which at first was mostly my cat). I was really inspired by how Randy Newman often wrote in character - that opened up the options of what songwriting could be for me.

I have creative parents, who luckily were interested in what I was up to. I went to a music college in Bromley-by-bow in East London, which gave me space to find out what kind of artist I wanted to be

As a kid, I consistently put on shows that I would insist on my family members providing an audience for. The kitchen was similar to the Royal Mile, where I would thrust hand-drawn flyers into unsuspecting aunties' hands.

Working in the reptile house in London Zoo.

It forced me to get better at making videos and find new ways to showcase my work online. I definitely feel more grateful now for live performances than ever before.

I don’t think art is exempt from thinking about how what you’re saying could affect other people.

I’d love to work with the Pixar team to make a visual album. Then I could fulfil my childhood dream of turning my ideas into a movie

Visit the fringe and see where could be a good fit for you. If logistically it can work, I’d always recommend the Free Fringe as a way to do it with less financial terror.

2 pm at the Banshee labyrinth (Banquet Hall) 6-28th of August (except for Wednesdays) as part of the Free Fringe.

You can watch Gecko's show at the Banshee Labyrinth (Banquet Hall) at 2 pm on 6-28th of August (except for Wednesdays) as part of the Free Fringe. For more information visit https://www.edfringe.com/ 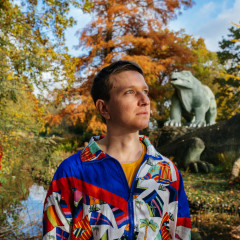 "Being a part of a festival that is so sprawling and has such variety is an inspiring thing. Also, the ups and downs of it forge a bond with your fellow performers like no other."