Voice MagInterviewsInterview with The F…

"If you want to feel better about your own dysfunctional romantic relationship, this might be the show for you! We have been married for ten years and have the therapy bills to prove it."

Hello! We are a cabaret-americana duo made up of Stephanie Dodd (originally from Fremont, Nebraska - vocals/accordion) and Justin Badger (originally from Fremont, California - vocals/guitar). We call ourselves The Fremonts. Our music was born in New York City and raised in Boulder, Colorado. We present our original music and stories with performance skills honed from years of working as professional actors.
How would you describe your show?

If you want to feel better about your own dysfunctional romantic relationship, this might be the show for you! We have been married for ten years and have the therapy bills to prove it. In our dark comedy cabaret, we perform our original music and tell our story of meeting in New York, performing on Broadway, accidentally moving to a pretentious mountain town and doing everything in our power to stay sane and married at the same time. This show was born when Executive Producer & Advertising Legend Chuck Porter declared, “Hey kids, let’s do a show!” after a few beers in a hotel bar. It has a companion piece, a full-length album by the same title, which was released digitally in April 2019.
Why do you want to perform at Edinburgh Festival Fringe?
After performing our cabaret around the US, we realised that we had a really good festival show on our hands. It’s just over an hour long, very simple in its staging, packed with music, comedy and real-life stories, and most importantly the audiences were eating it up. We’re excited to see how it plays in front of an international audience. Outside of being artists, we both work full-time corporate day jobs, so it will be a breath of fresh air to be surrounded by a community of theatre lovers and performers. We can’t wait to see shows from all over the world and get swept up into the energy of the Fringe.
What differentiates it from other festivals?

Our only other festival experiences are performing at the New York Musical Theatre Festival, the World Accordion Day Festival and the International Aerial Dance Festival. Those festivals are so unique, and each cater toward a specific genre of performance. The Edinburgh Fringe is much bigger and more diverse. Plus, it gives us the chance to perform our show 24 times in 25 days. Where else could we experience that kind of torture, err opportunity?
What first motivated you to enter the industry? Who were your inspirations?

Justin – At 8 years old, my first role was as an Oompa Loompa in Charlie and the Chocolate Factory. I loved it because I felt like I was good at it and, as a child of divorce lost in a sea of step siblings, I really needed the attention. The first time I saw Robert Preston in the Music Man, I was hooked. My parents recorded it off TV on to a VHS tape and I watched it over and over until it broke.
Steph – I grew up singing in the church choir, playing cello in the symphony, flute in the band, piano in the jazz ensemble, performing with the dance team, and hamming it up in every theatre production that would have me. I just loved being around creative people and making something fun together. Even hanging out at home with my cousins and sister, I would always make up a show and force them to perform it with me for our parents and grandparents. When I was 12, I saw a touring production of Cats and was mesmerized. I went home, memorized the soundtrack and learned how to play Memory on the piano. It became my dream to move to NYC and work in theatre. At 18 years old, I took a bus from rural Nebraska to New York City with $100 cash – no cell phone, no credit card - to do an unpaid theatre internship in midtown Manhattan. I ended up finding a home there.
How has your background, upbringing and education had an impact on your artistic career?

Steph – I grew up in a working-class home in rural middle America. My parents were supportive of my creative interests, but they were fundamentalist Christians and had traditional family values. They were very unhappy when I moved to NYC to be an artist and tried to get me to move home and give it up at every opportunity. I don’t have much of an education. I went to public school and finished a 4-year state college program in 2.5 years. I just wanted to be performing. I moved to NYC young, poor and unexperienced. I auditioned for everything I could while waiting tables and sleeping in a friend’s living room. It was a rough time, but I think that being scrappy and driven really served me in the long run.
Justin – I started going to community theatre at an early age because my brother ran the lights. I couldn’t wait until I was old enough to be in the shows. My mom always encouraged me to “go confidently in the direction of my dreams.” So, I went on to get two degrees in acting, one of which was a graduate degree at Columbia University in NYC. Through the connections I made there, I ended up getting my first Broadway show.
What is your earliest childhood art memory?
Justin – At 4 years old, my mom put me in a ballet class. For the recital, we were all dressed as birds. Right before I went on, I was struck with such severe stage fright that I threw up on my blackbird costume. I never made it on stage.
Steph – When I was 5, my babysitter played Cinderella in a community theatre production. The part when they changed her clothes from rags to a beautiful gown was pure magic.
If you didn’t have your current job, what would you probably be doing?
In addition to performing as The Fremonts, we both work full-time corporate day jobs. If we didn’t have to work so much to stay afloat financially, we would spend all our time playing music, writing and touring. We’re still hoping that dream will come true someday.

Did Covid-19 change the way you create work? Do you approach shows with a different mentality now?
We performed several online shows during the pandemic from our house. We set up a little stage, learned how to do some simple lighting and wrote new material that we thought would play in the digital space. While we’re very happy to be back to performing live, we’re still more connected to our digital audience than ever. We always try to live stream our shows or at least put dress rehearsals online for our fans who live further away.
Describe the last year in 5 words or less?

More performing, Less couch time.
Do you subscribe to the idea that art should be exempt from ‘cancel culture’?

We think it’s important for people to be able to take in the art that they want to take in. If you’re comfortable listening to music that was written by a serial rapist, then that’s your business. If you like laughing at jokes told by people who are anti-trans, then Netflix has content available for you. Personally, we’ll skip it. We think it’s interesting to know so much about the lives, beliefs and behaviours of famous artists and to see them publicly held accountable for their actions.
If you could work with anybody, from any point in history, who would you pick and why?

We wish we could have been flies on the wall while Goldie Hawn and Dean Martin rehearsed their bits for The Dean Martin Show. They’re playing such exaggerated versions of themselves and that’s what we’re aiming to do in The Failure Cabaret. They looked like they had so much authentic fun together. We’ve been married for over 10 years, so we’re a lot crabbier with each other. We could learn a lot from them.
What advice would you give to someone who wants to take a show up to the fringe?

It takes a lot of time, thought and money to produce a show at the Fringe. Make sure you have a product that you really believe in because producing at the Fringe involves a ton of unsexy administrative work.
When and where can people see your show?

We are in The Belly Laugh at Underbelly Cowgate. Our show starts at 9:05pm every night from August 4th – 28th with a day off on the 16th.
And where can people find, follow and like you online?

Our website always lists all of our shows and current news - www.thefremontsmusic.com 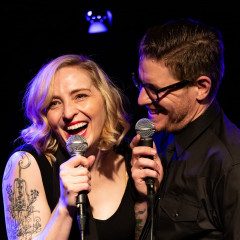 Interview with The Fremonts

"If you want to feel better about your own dysfunctional romantic relationship, this might be the show for you! We have been married for ten years and have the therapy bills to prove it."