"I decided a long time ago that failure is not an option. I’ve sacrificed way too much to not be living my purpose. I love, live and breathe stand-up comedy. I honestly feel so lucky to be doing the thing I love."

My name is Emo Majok and I am a South Sudanese/ Australian Comedian based out of Perth Western Australia.

My show African Aussie is like a semi autobiography of my life story which consists of my family fleeing war torn Sudan and finding a refugee camp in neighbouring country, Ethiopia, to which my mother gave birth to me in. Three years later we are forced to flee once again due to war breaking out. So, my family walked to yet another country to find a refugee camp, this time neighbouring Kenya. Four years later we got sponsored to Australia and then the real fun begins.

My show Aussie African covers early life in Australia, starting from scratch, knowing no English, adjusting to western culture, and my past employment before finding my calling in stand-up comedy.  As a single father of three the show paints a clear picture of what it was like leaving a 80k a year job to start a new career in stand-up comedy, while managing parental duties. We talk about one-night stands, past adventures travelling the globe performing stand-up comedy, to the world coming to a halt due to the global pandemic and much more.

This show covers it all.

Ever since I started stand-up comedy all I’ve ever heard was “you have to go to the world biggest Fringe festival, it’s in Edinburgh”. I almost made it to Edinburgh Fringe at the start of my comedy career when I was competing in Australia's biggest amateur comedy competition Raw Comedy 2018. The Prize was the winner gets an all-expenses paid trip to Edinburgh Fringe (I did not win).

Four years later I’m signed to a management agency making my way down for my debut, everything happens for a reason.

I debuted in 2018 with my friend and fellow comedian Joe White in a string of shows at the Perth Fringe Festival, after that I knew I was at the right place, at the right time doing what I was meant to do, making everyone laugh out loud! I’m inspired by all the great legends in comedy, for example Dave Chappelle, Eddie Murphy, Katt Williams but I’m most inspired by my children and my family who are the gift that keeps giving in materials haha.

I definitely don’t hold back when I let the audience experience what I experienced in life, it’s just nice to see all my life struggles as a comedy show. There’s no better feeling than looking up from the stage and seeing that everything I went through in life, is putting a smile on someone sitting right in front of me. That feeling of Positivity can be very addictive.

The sound of gunfire as people flee.

I decided a long time ago that failure is not an option. I’ve sacrificed way too much to not be living my purpose. I love, live and breathe stand-up comedy. I honestly feel so lucky to be doing the thing I love. I think if more people did what they love the world would be a happier place.

I’d be lying if I said covid did not change the way I create, both in a good and a bad way. Covid showed me just how resourceful I could be. When we were in lock down all I did was write and create, that was of course after all the drinking and getting over being locked down.

My solution has always been to create your own opportunities because the success or failure of your progression is only attributed to what you put in.

A 1000%. People often forget that they have the choice in what kind of energy they allow into their space. If you hate swimming, stay out of swimming pools. You don't like what's on Fox News, change the channel. If you don't like something an entertainer said don’t buy their ticket or watch them next time, just don't ruin it for the next person. If they were in the wrong, it's on them to fix it not on you to decide they should never work again.
If you could work with anybody, from any point in history, who would you pick and why?

I believe Dave Chappelle is the greatest to ever do, he speaks from the heart and has always advocated a fair and equal treatment to mankind when it comes to his comedy.

Save lots of money and make sure you feel ready.

My show is held at Underbelly at 8:30 starting August 3rd to the 29th with August 15th being my one day off come say hey.

All my social media, website, tickets etc are all in my linktree down below

See Emo Majok: African Aussie at the Underbelly during the Edinburgh Festival Fringe from 3-29 August. For more information and tickets visit www.edfringe.com or www.underbelly.co.uk 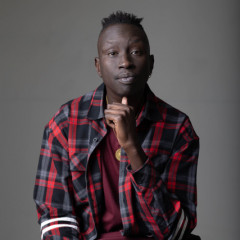 "I decided a long time ago that failure is not an option. I’ve sacrificed way too much to not be living my purpose. I love, live and breathe stand-up comedy. I honestly feel so lucky to be doing the thing I love."