Madeleine MacMahon is performing in Breathless, a new play by Laura Horton that will be at Edinburgh Festival Fringe this August.

Hi, I'm Madeleine MacMahon and I'm an actor/singer/comedian from the Cotswolds. (Specifically North Gloucestershire - ALMOST Warwickshire, but you'll have to catch my stand-up for that spiel). I'm playing Sophie in Breathless written by Laura Horton.

A funny and touching monologue about moving home and moving on, that explores hoarding disorder, compulsive behaviour and identity.

It's like the trade show of our industry. It's where you see new work from artists and companies you love and discover brand new things you never thought you would. You learn from one another - good and bad - and it's brilliant.

I don't know really, I haven't been to many. But it's a whoooole month, and there's an endurance test in that. If you can get to the end of that, covered in sweat and tears and rain and remorse and STILL believe in your show, you know you've made something worthwhile.

My early loves were comedies like Absolutely Fabulous, so Jennifer Saunders was a big one. As I got older, stand-up from Eddie Izzard and dramatic actors like Pete Postlethwaite had a range of styles to their work that I really respected. I'd still love to edge into that comedy drama TV world.

I suppose it's the 'nurture' part of who we are. My parents separated when I was 6...and then again sort of about 18 months later, but our Dad always followed us, so we were lucky enough to have 3 parents, really. It was a complicated time and so I think I'm good at travelling and adapting and using humour to integrate. And I have 2 great sisters and an amazing Mum, but those relationships weren't always easy, so I've always been interested in female relationships and power dynamics.

I went to my local comp up to 16, then did my A Levels at ArtsEd in London 16-18, then a Drama BA at Hull University, but didn't do Drama school after that. So I suppose I've had a mixture of normal and privileged education. I've sort of seen both sides, then moved back to London with friends and just started to do it. The security of a room in your parents’ house to fall back on is a luxury that's not lost on me.

100% seeing the Care Bears live. They came up the aisle and pulled my sister out to take her on stage and I was TERRIFIED.

I always wanted to be a barrister or a hairdresser, so something where I argue my creative corner I suppose. But I've always loved clothes and my Mum runs a dress agency in the Cotswold town I grew up in (shout out to The Attic, Chipping Campden) and I think she has the best job ever. So maybe I'd beg her for some blatant nepotism.

I was fortunate enough to work on some online projects, which was great. And some live work which was streamed. It's changed the ways actors audition and are considered for work. Some of that's good. It opens up casting to more actors (you can watch 20 tapes in the time you meet 6 people) but it's harder to get a sense of working with a person over a video call. So, I'm even more chuffed that Laura and Steph (writer/producer and director respectively) took a chance on an actor they'd never met.

It's made me very grateful to be back in a real room, with the hope that work will continue to be recorded and accessible to those for whom attending a live performance isn't possible.

Oooo I don't like the term 'cancel culture', as so many of the people or groups that claim they've been victims of it are very much still around. I believe we should call each other out on behaviour and give one another space to learn and grow. I've appreciated it when people have done that for me.

But do I think art is exempt from having to justify its choices? No. I think you can present characters that have a range of views and ideas that are at odds with what we believe the world should look like now, but it should be clear what we are trying to say or provoke by doing that. Presenting hateful or damaging language or opinions in art has to be justified. Otherwise, it's just damaging. I'm sure we've all seen that.

Oooo. I'd want to be in the Victoria Wood gang. Or Smack The Pony/Big Train era. Sketch shows that make a point and comedy that makes you cry.

Go with something you love or care about and try and look after yourself (whatever that looks like to you). Time to yourself/yoga/checking in with people from home/crying/all of the above. Remember that the success of your show is not a direct commentary on who you are as an artist or person, no matter how much it might feel like it at the time. And go and watch other shows! (if you can). It will get your head out of your bum.

Breathless is on at 3pm, Bunker 2 at the Pleasance Courtyard. There is also a podcast about hoarding we're dropping alongside the play.

Breathless is performing at Pleasance Courtyard (Bunker 2) at 3pm, 3-29 August (Not 10 or 17). For tickets, visit https://www.pleasance.co.uk/event/breathless#overview 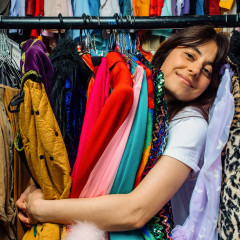 Madeleine MacMahon is performing in Breathless, a new play by Laura Horton that will be at Edinburgh Festival Fringe this August.