One tweet I received said, “well done on finding the easiest way to do comedy. You can just write stuff on your laptop and get that to remember it and say it for you.” Clearly by choosing to be disabled, I've taken the easy way out. And, for that, I’m truly sorry!

Hi, I’m Lee Ridley, also known as the Lost Voice Guy, and I’m a stand-up comedian. You probably recognise me most from winning Britain’s Got Talent in 2018 but I’ve also been on Live At The Apollo, The Last Leg, The Royal Variety Performance and Jerk, as well as hosting my own Christmas Comedy Club on ITV!

My show is called ‘Cerebral LOLsy’. And yes, I did take the rest of the week off work after thinking of that title. The show is basically a look back at my life since I won BGT and all the random stuff that’s happened since. And that includes dancing with Paul from The Chuckle Brothers at the Royal Variety Performance after show (which was definitely a career highlight!)

There’s plenty of other stories. People always seem to get my name wrong as well. The main reason that I chose a stage name was so I would stand out from the crowd of all the other new comedians when I was just starting out. I thought it would make me more memorable. But you’d be surprised at the many variations of that name that I have called. People have called me all sorts. From no voice boy, to misplaced voice man, to the guy with no voice.

And then, of course, there’s been the trolls on the internet.  For example, one tweet that I received said, “well done on finding the easiest way to do comedy. You can just write stuff on your laptop and get that to remember it and say it for you.” Of course, he is right. Can you imagine how hard my life would be if I could actually talk? It just doesn't bear thinking about. I'd have to remember how to say words, remember how to form sentences, remember all my jokes. Clearly by choosing to be disabled, I have taken the easy way out. And, for that, I’m truly sorry!

Even before I started doing stand up comedy myself, I’d already made a trip up to the Fringe for quite a few years. It’s just the dream place to be if you’re a comedy fan. So I can remember having my spreadsheet of shows that I wanted to see and running from one venue to the next so I could fit as many shows in as possible. So, when the chance came to take my own show to the Fringe, it was a no brainer. I’d be following in the footsteps of some of my comedy heroes, and that was a very big deal to me.

I think that it’s the atmosphere it creates in the city that makes it so special. Edinburgh is always buzzing during the 3 weeks of the Fringe and I’ve never experienced anything like that anywhere else. It’s a great place to be during the Fringe

I did watch a lot of comedy when I was growing up. I think I was probably about 13 years old when I first started watching it properly. Some of my favourite memories are of watching the likes of Jack Dee and Lee Evans on TV as a kid and laughing my head off. The two are very different comedians. Lee is loud and energetic and Jack is laid-back and deadpan, but I like both of them because they’re each bringing something very distinctive to the stage. Lee Evans is a master of using his body language to enhance his act. When I used to watch him, it wasn’t just the jokes that made me roll around the floor laughing, it was his facial expressions, and that he used to run around the stage at 100 miles per hour. He was a comedy whirlwind. Years later, his style was to influence me a lot when I started my stand-up career. He made me realize that comedy isn’t just about words, it’s about having a big stage presence too. Of course, I watched a lot of comedy on television as well. Everything from Bottom to Spitting Image to Father Ted and loads of other stuff in-between. But my absolute favourite show has always been the League of Gentlemen. I still think it’s a masterpiece of comedy and definitely helps explain my twisted sense of humour. I think I liked the fact that they were making jokes out of stuff that was a bit weird and left-field. that was probably my introduction to the darker side of comedy. I didn’t know it existed up until that point. So, they opened my eyes to a whole new world. For the first time I got the impression that anything could be joked about if handled in the right way and I loved it. Of course, I never thought I’d ever be a comedian myself. I just thought it wasn’t possible because I couldn’t speak. So, I didn’t really give it much thought when I was growing up. My career in stand-up comedy came about because my mate thought it would work well. Of course, I thought he was crazy but the idea stuck in the back of my head. Eventually, a few months later, I decided to give it a try because I knew I’d regret it if I didn’t. It turns out my mate was right! It’s just grown from there really.

I think my background has had a massive impact on my career. Mainly because most of my comedy comes from my life experiences living as a disabled person, so that’s given me 41 years of material to work with for a start. But I also think it’s had an impact because growing up as a disabled person was very frustrating at times and I didn’t really have any way of venting those frustrations. So, I would say that stand-up comedy has helped to give me a way to express myself properly for the first time as well.

It’s probably when I was cast as a robot in my school play. That wasn’t typecasting at all! But I think it made me realise that I enjoyed performing and putting on a show for everyone.

Well, my degree is in journalism so I’d probably be doing something in that area. My last proper job was in the media team at a council, but I’m not sure if I’d still be there now. There’s only so many press releases you can write about recycling bins before it gets boring!

I’m not sure if it’s changed the way that I work. I’m very stuck in my ways. It’s been a really hard time for most people, obviously. My creativity has really suffered during lockdown, to be honest. It’s pretty hard to get inspired when you’re stuck inside all day. I’ve still had the opportunity to write my Radio 4 sitcom, called Ability, and I really enjoyed doing that. It gave me my creative spark back, and I loved having fun with it again. Hopefully that’ll spur me on to be more creative this year.  I just feel lucky that I had a really busy year in 2019, which has helped massively in the last year. I don’t know what I would have done otherwise. At least, it’s given me a good opportunity to write my Edinburgh show.

I don’t think it’s as simple as that. I think it would depend on a number of things such as context and target audience. From a personal point of view, I haven’t found the limit in my comedy yet. I think that anything can be joked about as long as it is handled in the correct way. Obviously, people sometimes misjudge this and get it wrong. But I would rather do that than not try at all.

As I said, I’m a huge League of Gentlemen fan, so I’d love to work with those guys one day. Although, I’m not sure if I’d cope. I’d probably just turn into a fanboy and be starstruck.

Make sure you’re doing it for the right reasons because you’re definitely not going to make any money while you’re here. But as long as you’re enjoying it, that’s all that matters. Oh, and avoid all the silent discos you see at the Fringe.

Cerebral LOLsy is on at the Gilded Balloon at 6.30pm each night from the 15th to the 28th of August.

Cerebral LOLsy is on at the Gilded Balloon at 6.30pm each night from the 15th to the 28th of August. For tickets and more information, visit edfringe.com 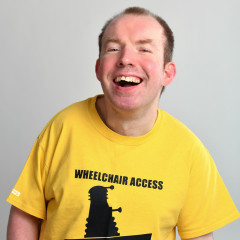 One tweet I received said, “well done on finding the easiest way to do comedy. You can just write stuff on your laptop and get that to remember it and say it for you.” Clearly by choosing to be disabled, I've taken the easy way out. And, for that, I’m truly sorry!